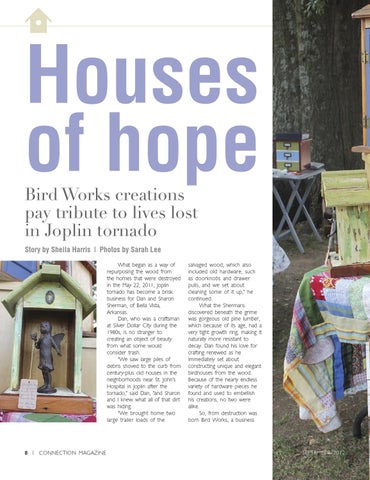 Houses of hope Bird Works creations pay tribute to lives lost in Joplin tornado Story by Sheila Harris | Photos by Sarah Lee What began as a way of repurposing the wood from the homes that were destroyed in the May 22, 2011, Joplin tornado has become a brisk business for Dan and Sharon Sherman, of Bella Vista, Arkansas. Dan, who was a craftsman at Silver Dollar City during the 1980s, is no stranger to creating an object of beauty from what some would consider trash. “We saw large piles of debris shoved to the curb from century-plus old houses in the neighborhoods near St. John’s Hospital in Joplin after the tornado,” said Dan, “and Sharon and I knew what all of that dirt was hiding. “We brought home two large trailer loads of the

salvaged wood, which also included old hardware, such as doorknobs and drawer pulls, and we set about cleaning some of it up,” he continued. What the Shermans discovered beneath the grime was gorgeous old pine lumber, which because of its age, had a very tight growth ring, making it naturally more resistant to decay. Dan found his love for crafting renewed as he immediately set about constructing unique and elegant birdhouses from the wood. Because of the nearly endless variety of hardware pieces he found and used to embellish his creations, no two were alike. So, from destruction was born Bird Works, a business

A amgazine dedicated to Southest Missourians 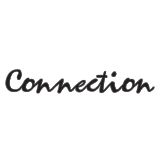