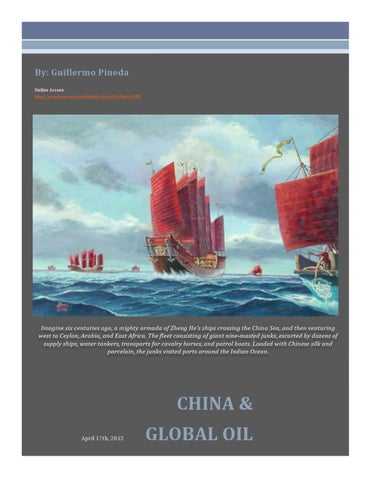 Imagine six centuries ago, a mighty armada of Zheng He&#39;s ships crossing the China Sea, and then venturing west to Ceylon, Arabia, and East Africa. The fleet consisting of giant nine-­‐masted junks, escorted by dozens of supply ships, water tankers, transports for cavalry horses, and patrol boats. L oaded with Chinese silk and porcelain, the junks visited ports around the Indian Ocean.

Latest News China’s energy consumption has reached record highs in recent years behind: rapid economic development, expanding middle class population, motorization, and urbanization. In 2010, China became the world’s largest energy consumer overtaking the USA during a year which saw the rebound in the global economy drive consumption higher and at a rate not seen since the aftermath of the 1973 oil price shocks. Globally, energy consumption grew more rapidly than the economy, meaning that the energy intensity of economic activity increased for a second consecutive year since the financial crisis of 2008. Chinese energy consumption grew by 11.2%. By last year, oil remained the world’s leading fuel, at 33.6% of global energy consumption, but it continued to lose market share for the 11th consecutive year. In 2008, China became the world’s second largest consumer of oil after the United States and the third largest net importer of oil. It is forecasted that the country will account for 37.18% of Asia Pacific regional oil demand by 2015, while providing 52.20% of supply. In the region, the principal importers are China, Japan, India and South Korea, respectively. Oil consumption between 2011 and 2020 is set to increase by 39.18%, with growth slowing to an assumed 3.0% per annum by the end of the period and the country using 13.12mn b/d by 2020. Between the same period, it is forecasted a decrease in Chinese oil production of 4.48%. Crude volumes should peak in 2014 at 4.14mn b/d, then to fall steadily to 3.90mn b/d in 2020.1 2

Self-­‐reliance and self-­‐sufgiciency are the key objectives of energy policy.

Production of oil can no longer meet domestic demand.

“Go abroad and buy,” is the response to the ginancial turmoil that began in 2008.

China’s investment in resource and energy sectors continues to increase.

21St Century Geopolitics The most important aspect of China’s maritime security today is driven by considerations of energy security. China is seeking to diversify the source of some of its oil away from areas of volatility in order to reduce the risk of oil shortage or unavailability. To this end African and Central Asian countries have recently increased their share of China’s oil supply, although the Middle East countries remain the major suppliers for China. Foreign policy and domestic economic policy are inseparably entangled with each other. Energy policy in China is part of foreign policy in order to sustain China’s economic growth. Nearly 80 percent of China’s imports from around the world are through the sea routes and the ships pass through the Straits of Hormuz and Malacca. To keep the control and stability of the South China Sea is one of China’s most important goals. Also, China has acquired oil and gas fields 3 Jian, Zhang (2011). China’s Energy Security: Prospects, Challenges, and Opportunities. The Brookings Institution. Washington, DC. p.6

around the world and has recently started to build a huge strategic reserve of oil, gas and coal. A great deal of emphasis is being laid on ensuring that the vulnerability of the sea routes is minimized. Currently, China imports most of its oil from the Middle East (Saudi Arabia, Iran, and Oman), Africa (Angola, Sudan, Libya), Asia (Russia), Latin America (Brazil, Venezuela), and North America (Canada).

An update on China's current status in Global Production and Consumption of Oil. Latests figures are for the year 2011. 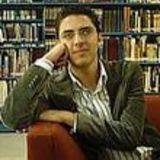