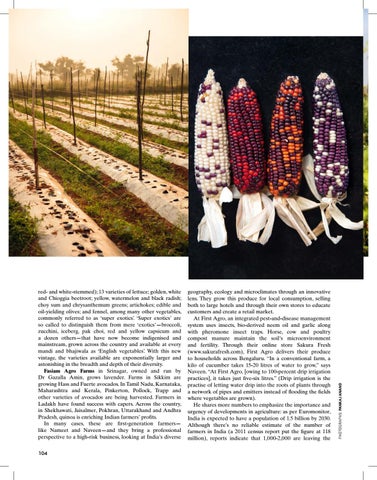 geography, ecology and microclimates through an innovative lens. They grow this produce for local consumption, selling both to large hotels and through their own stores to educate customers and create a retail market. At First Agro, an integrated pest-and-disease management system uses insects, bio-derived neem oil and garlic along with pheromone insect traps. Horse, cow and poultry compost manure maintain the soil’s microenvironment and fertility. Through their online store Sakura Fresh (www.sakurafresh.com), First Agro delivers their produce to households across Bengaluru. “In a conventional farm, a kilo of cucumber takes 15-20 litres of water to grow,” says Naveen. “At First Agro, [owing to 100-percent drip irrigation practices], it takes just five-six litres.” (Drip irrigation is the practise of letting water drip into the roots of plants through a network of pipes and emitters instead of flooding the fields where vegetables are grown). He shares more numbers to emphasize the importance and urgency of developments in agriculture: as per Euromonitor, India is expected to have a population of 1.5 billion by 2030. Although there’s no reliable estimate of the number of farmers in India (a 2011 census report put the figure at 118 million), reports indicate that 1,000-2,000 are leaving the

red- and white-stemmed); 13 varieties of lettuce; golden, white and Chioggia beetroot; yellow, watermelon and black radish; choy sum and chrysanthemum greens; artichokes; edible and oil-yielding olives; and fennel, among many other vegetables, commonly referred to as ‘super exotics’. ‘Super exotics’ are so called to distinguish them from mere ‘exotics’—broccoli, zucchini, iceberg, pak choi, red and yellow capsicum and a dozen others—that have now become indigenised and mainstream, grown across the country and available at every mandi and bhajiwala as ‘English vegetables’. With this new vintage, the varieties available are exponentially larger and astonishing in the breadth and depth of their diversity. Fasiam Agro Farms in Srinagar, owned and run by Dr Gazalla Amin, grows lavender. Farms in Sikkim are growing Hass and Fuerte avocados. In Tamil Nadu, Karnataka, Maharashtra and Kerala, Pinkerton, Pollock, Trapp and other varieties of avocados are being harvested. Farmers in Ladakh have found success with capers. Across the country, in Shekhawati, Jaisalmer, Pokhran, Uttarakhand and Andhra Pradesh, quinoa is enriching Indian farmers’ profits. In many cases, these are first-generation farmers— like Nameet and Naveen—and they bring a professional perspective to a high-risk business, looking at India’s diverse This third edition features change-makers, entrepreneurs and innovators under 40. From those growing "super exotic" vegetables in India to t...

This third edition features change-makers, entrepreneurs and innovators under 40. From those growing "super exotic" vegetables in India to t...