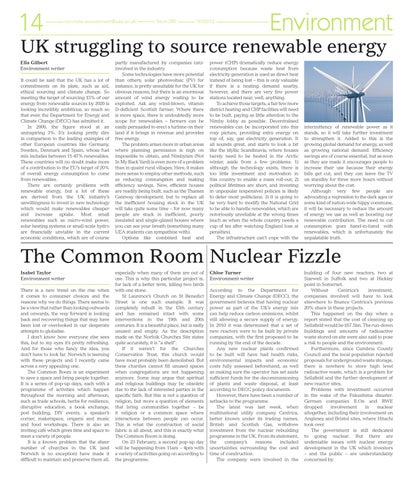 Ella Gilbert Environment writer It could be said that the UK has a lot of commitments on its plate, such as aid, ethical sourcing and climate change. So meeting the target of sourcing 15% of our energy from renewable sources by 2020 is looking incredibly ambitious, so much so that even the Department for Energy and Climate Change (DECC) has admitted it. In 2009, the figure stood at an uninspiring 3%. It’s looking pretty dire in comparison to the leading examples of other European countries like Germany, Sweden, Denmark and Spain, whose fuel mix includes between 11-47% renewables. These countries will no doubt make more of a contribution to the EU’s target of 20% of overall energy consumption to come from renewables. There are certainly problems with renewable energy, but a lot of these are derived from the UK industry’s unwillingness to invest in new technology which would make renewables cheaper and increase uptake. Most small renewables such as micro-wind power, solar heating systems or small-scale hydro are financially unviable in the current economic conditions, which are of course

partly manufactured by companies (un)involved in the industry. Some technologies have more potential than others; solar photovoltaic (PV) for instance, is pretty unsuitable for the UK for obvious reasons, but there is an enormous amount of wind energy waiting to be exploited. Ask any wind-blown, vitamin D-deficient Scottish farmer. Where there is more space, there is undoubtedly more scope for renewables – farmers can be easily persuaded to erect a turbine on their land if it brings in revenue and provides free energy. The problem arises more in urban areas where planning permission is nigh on impossible to obtain, and Nimbyism (Not In My Back Yard) is even more of a problem than in quaint rural villages. Here, it makes more sense to employ other methods, such as reducing consumption and making efficiency savings. New, efficient houses are readily being built, such as the Thames Gateway development, but to replace all the inefficient housing stock in the UK will take quite some time – for now many people are stuck in inefficient, poorly insulated and single-glazed houses where you can see your breath (something many UEA students can sympathise with). Options like combined heat and

power (CHP) dramatically reduce energy consumption because waste heat from electricity generation is used as direct heat instead of being lost – this is only valuable if there is a heating demand nearby, however, and there are very few power stations located near, well, anything. To achieve those targets, a fair few more district heating and CHP facilities will need to be built, paying as little attention to the Nimby lobby as possible. Decentralised renewables can be incorporated into this rosy picture, providing extra energy on top of, say, gas electricity generation. It all sounds great, and starts to look a bit like the idyllic Scandinavia, where houses barely need to be heated in the Arctic winter, aside from a few problems: 1) although the technology exists, there is too little investment and motivation in this country to enable a mass roll-out; 2) political lifetimes are short, and investing in unpopular (expensive) policies is likely to deter most politicians; 3) it is going to be very hard to modify the National Grid to be able to handle renewables, which are notoriously unreliable at the wrong times (such as when the whole country needs a cup of tea after watching England lose at penalties). The infrastructure can’t cope with the

intermittency of renewable power as it stands, so it will take further investment to strengthen it. Added to this is the growing global demand for energy, as well as growing national demand. Efficiency savings are of course essential, but as soon as they are made it encourages people to increase their use because their energy bills get cut, and they can leave the TV on standby for three more hours without worrying about the cost. Although very few people are advocating a regression to the dark ages or some kind of nation-wide hippy commune, it will be necessary to reduce the amount of energy we use as well as boosting our renewable contribution. The need to cut consumption goes hand-in-hand with renewables, which is unfortunately the unpalatable truth.

The Common Room Nuclear Fizzle Isabel Taylor Environment writer There is a new trend on the rise when it comes to consumer choices and the reasons why we do things. There seems to be a view that rather than looking outwards and onwards, the way forward is looking back and recovering things that may have been lost or overlooked in our desperate attempts to globalise. I don’t know how everyone else sees this, but to my eyes it’s pretty refreshing. And for those who fancy the idea, you don’t have to look far. Norwich is teeming with these projects and I recently came across a very appealing one. The Common Room is an experiment to save a space and bring people together. It is a series of pop-up days, each with a programme of activities which happen throughout the morning and afternoon, such as trade schools, herbs for resilience, disruptive education, a book exchange, pod building, DIY events, a speaker’s corner, makerspace, origami and music and food workshops. There is also an inviting café which gives time and space to meet a variety of people. It is a known problem that the sheer number of churches in the UK (and Norwich is no exception) have made it difficult to maintain and preserve them all,

especially when many of them are out of use. This is why this particular project is, for lack of a better term, killing two birds with one stone. St Laurence’s Church on St Benedict Street is one such example. It was completely rebuilt in the 15th century and has remained intact with some interventions in the 19th and 20th centuries. It is a beautiful place, but is sadly unused and empty. As the description made on the Norfolk Churches Site states quite accurately, it is “a shell”. If it weren’t for the Churches Conservation Trust, this church would have most probably been demolished. But these charities cannot fill unused spaces when congregations are not happening anymore. Some may argue that spiritual and religious buildings may be obsolete due to the lack of interested parties in the specific faith. But this is not a question of religion, but more a question of elements that bring communities together – be it religion or a common space where interactions between people can occur. This is what the construction of social fabric is all about, and this is exactly what The Common Room is doing. On 23 February, a second pop-up day will be happening from 11am – 4pm with a variety of activities going on according to the programme.

Chloe Turner Environment writer According to the Department for Energy and Climate Change (DECC), the government believes that having nuclear power as part of the UK’s energy mix can help reduce carbon emissions, whilst still allowing a secure supply of energy. In 2010 it was determined that a set of new reactors were to be built by private companies, with the first proposed to be running by the end of the decade. Any new nuclear plants confirmed to be built will have had health risks, environmental impacts and economic costs fully assessed beforehand, as well as making sure the operator has set aside sufficient funds for the decommissioning of plants and waste disposal, at least according to DECC policy documents. However, there have been a number of setbacks to the programme. The latest was last week, when multinational utility company Centrica, better known under its trading names, British and Scottish Gas, withdrew investment from the nuclear rebuilding programme in the UK. From its statement, the company’s reasons included uncertainties surrounding the cost and time of construction. The company were involved in the

building of four new reactors, two at Sizewell in Suffolk and two at Hickley point in Somerset. Without Centrica’s investment, companies involved will have to look elsewhere to finance Centrica’s previous 20% share in these projects. This happened on the day when a report stated that the cost of cleaning up Sellafield would be £67.5bn. The run-down buildings and amounts of radioactive waste stored on site were also said to pose a risk to people and the environment. Furthermore, since Cumbria County Council and the local population rejected proposals for underground waste storage, there is nowhere to store high level radioactive waste, which is a problem for Sellafield and the further development of new reactor sites. Problems with investment occurred in the wake of the Fukushima disaster. German companies E.On and RWE dropped involvement in nuclear altogether, including their involvement on Anglesey and Bristol sites, where Hitachi took over. The government is still dedicated to going nuclear. But there are undeniable issues with nuclear energy development in the UK which investors – and the public – are understandably concerned by. 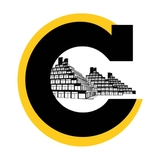