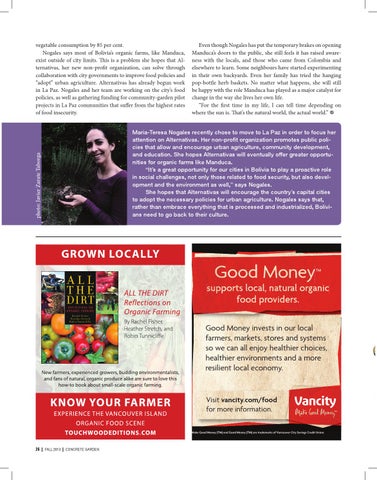 vegetable consumption by 85 per cent. Nogales says most of Bolivia’s organic farms, like Manduca, exist outside of city limits. This is a problem she hopes that Alternativas, her new non-profit organization, can solve through collaboration with city governments to improve food policies and “adopt” urban agriculture. Alternativas has already begun work in La Paz. Nogales and her team are working on the city’s food policies, as well as gathering funding for community-garden pilot projects in La Paz communities that suffer from the highest rates of food insecurity.

Even though Nogales has put the temporary brakes on opening Manduca’s doors to the public, she still feels it has raised awareness with the locals, and those who came from Colombia and elsewhere to learn. Some neighbours have started experimenting in their own backyards. Even her family has tried the hanging pop-bottle herb baskets. No matter what happens, she will still be happy with the role Manduca has played as a major catalyst for change in the way she lives her own life. “For the first time in my life, I can tell time depending on where the sun is. That’s the natural world, the actual world.” j

Maria-Teresa Nogales recently chose to move to La Paz in order to focus her attention on Alternativas. Her non-profit organization promotes public policies that allow and encourage urban agriculture, community development, and education. She hopes Alternativas will eventually offer greater opportunities for organic farms like Manduca. “It’s a great opportunity for our cities in Bolivia to play a proactive role in social challenges, not only those related to food security, but also development and the environment as well,” says Nogales. She hopes that Alternativas will encourage the country’s capital cities to adopt the necessary policies for urban agriculture. Nogales says that, rather than embrace everything that is processed and industrialized, Bolivians need to go back to their culture. Concrete Garden is an independent magazine, published semi-annually, with support from the University of Victoria, and printed by First Choi...

Concrete Garden is an independent magazine, published semi-annually, with support from the University of Victoria, and printed by First Choi...