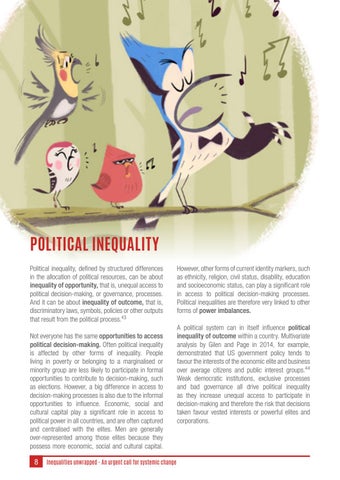 POLITICAL INEQUALITY Political inequality, defined by structured differences in the allocation of political resources, can be about inequality of opportunity, that is, unequal access to political decision-making, or governance, processes. And it can be about inequality of outcome, that is, discriminatory laws, symbols, policies or other outputs that result from the political process.43 Not everyone has the same opportunities to access political decision-making. Often political inequality is affected by other forms of inequality. People living in poverty or belonging to a marginalised or minority group are less likely to participate in formal opportunities to contribute to decision-making, such as elections. However, a big difference in access to decision-making processes is also due to the informal opportunities to influence. Economic, social and cultural capital play a significant role in access to political power in all countries, and are often captured and centralised with the elites. Men are generally over-represented among those elites because they possess more economic, social and cultural capital.

However, other forms of current identity markers, such as ethnicity, religion, civil status, disability, education and socioeconomic status, can play a significant role in access to political decision-making processes. Political inequalities are therefore very linked to other forms of power imbalances. A political system can in itself influence political inequality of outcome within a country. Multivariate analysis by Gilen and Page in 2014, for example, demonstrated that US government policy tends to favour the interests of the economic elite and business over average citizens and public interest groups.44 Weak democratic institutions, exclusive processes and bad governance all drive political inequality as they increase unequal access to participate in decision-making and therefore the risk that decisions taken favour vested interests or powerful elites and corporations. 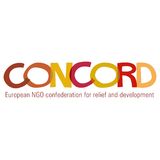 Rising inequalities are one of the most complex and pressing issues of our century. Protests around the wold show the urgency of the matter....

Rising inequalities are one of the most complex and pressing issues of our century. Protests around the wold show the urgency of the matter....