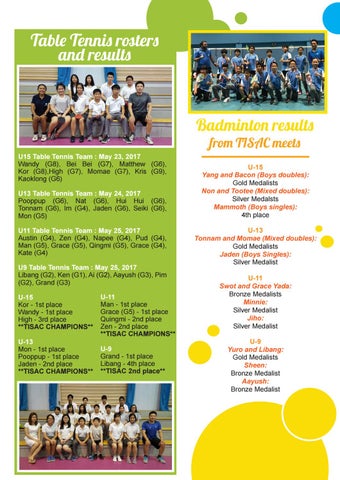 We are creating a Line group that will collect sport news from Concordian students, if you have any, please scan the QR code above and send out! We can put them in our Impact magazines!

Man and Mon U

sually when the twins play in the big tournaments, Man is slightly more successful than Mon. But, Mon won his first U12 Boys Single player championship at the PEA (Provincial Electricity Authority of Thailand) Champion Cup. Man was still the first runner up. Because of his victory at such a high-level tournament, Monâ&amp;#x20AC;&amp;#x2122;s national ranking moved up to 4th. Man is still ranked #2 in Thailand. The boys also earned first place team at the Set Table Tennis Club Championship 2017.

utter continues to be ranked in the top spot in his age group in Thailand. Putter won both 1st place Boys U12 and Doubles U12 at Guangzhou International Junior Tennis Tournament, representing the Thai team. He beat the #1 ranked Chinese Player in one of his best matches.

ow! Mon is the Champion in the first circuit of All Thailand Table Tennis Championships which was held last Aug.14, after a long furious battle. His national ranking is now Number 2 in the country in U12! Man and Mon were in the same age group. Man only lost to his brother Mon in the semi final round. He earned 2ne runner up. His seed in U12 is fourth in the nation!

Following their success at the Thai Championships, both were invited to display their talents on the popular show called Super 10 to display their table tennis skills. The show was broadcasted on August 26th and can be seen on youtube.

Keep up the good work and sportsmanship!