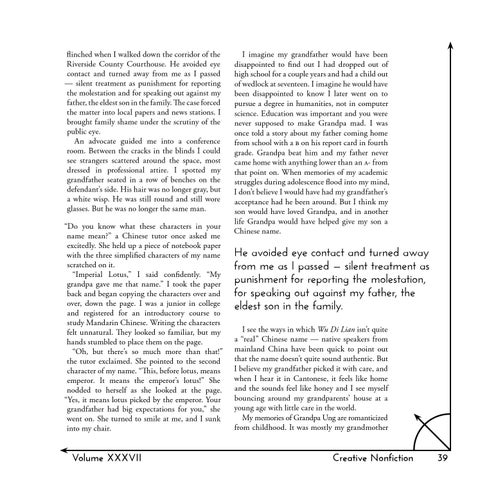 flinched when I walked down the corridor of the Riverside County Courthouse. He avoided eye contact and turned away from me as I passed — silent treatment as punishment for reporting the molestation and for speaking out against my father, the eldest son in the family. The case forced the matter into local papers and news stations. I brought family shame under the scrutiny of the public eye. An advocate guided me into a conference room. Between the cracks in the blinds I could see strangers scattered around the space, most dressed in professional attire. I spotted my grandfather seated in a row of benches on the defendant’s side. His hair was no longer gray, but a white wisp. He was still round and still wore glasses. But he was no longer the same man. “Do you know what these characters in your name mean?” a Chinese tutor once asked me excitedly. She held up a piece of notebook paper with the three simplified characters of my name scratched on it. “Imperial Lotus,” I said confidently. “My grandpa gave me that name.” I took the paper back and began copying the characters over and over, down the page. I was a junior in college and registered for an introductory course to study Mandarin Chinese. Writing the characters felt unnatural. They looked so familiar, but my hands stumbled to place them on the page. “Oh, but there’s so much more than that!” the tutor exclaimed. She pointed to the second character of my name. “This, before lotus, means emperor. It means the emperor’s lotus!” She nodded to herself as she looked at the page. “Yes, it means lotus picked by the emperor. Your grandfather had big expectations for you,” she went on. She turned to smile at me, and I sunk into my chair.

I imagine my grandfather would have been disappointed to find out I had dropped out of high school for a couple years and had a child out of wedlock at seventeen. I imagine he would have been disappointed to know I later went on to pursue a degree in humanities, not in computer science. Education was important and you were never supposed to make Grandpa mad. I was once told a story about my father coming home from school with a b on his report card in fourth grade. Grandpa beat him and my father never came home with anything lower than an a- from that point on. When memories of my academic struggles during adolescence flood into my mind, I don’t believe I would have had my grandfather’s acceptance had he been around. But I think my son would have loved Grandpa, and in another life Grandpa would have helped give my son a Chinese name.

He avoided eye contact and turned away from me as I passed — silent treatment as punishment for reporting the molestation, for speaking out against my father, the eldest son in the family. I see the ways in which Wu Di Lian isn’t quite a “real” Chinese name — native speakers from mainland China have been quick to point out that the name doesn’t quite sound authentic. But I believe my grandfather picked it with care, and when I hear it in Cantonese, it feels like home and the sounds feel like honey and I see myself bouncing around my grandparents’ house at a young age with little care in the world. My memories of Grandpa Ung are romanticized from childhood. It was mostly my grandmother This is the 37th edition of Conceptions Southwest. Editor-in-Chief: Gianna May

This is the 37th edition of Conceptions Southwest. Editor-in-Chief: Gianna May