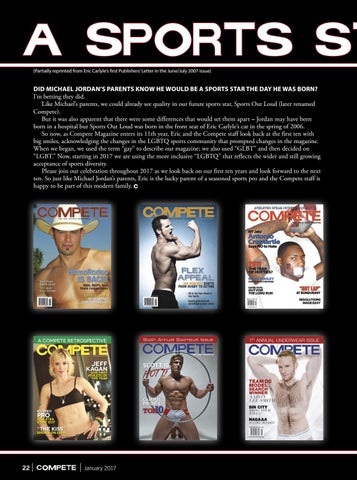 DID MICHAEL JORDAN’S PARENTS KNOW HE WOULD BE A SPORTS STAR THE DAY HE WAS BORN? I’m betting they did. Like Michael’s parents, we could already see quality in our future sports star, Sports Out Loud (later renamed Compete). But it was also apparent that there were some differences that would set them apart – Jordan may have been born in a hospital but Sports Out Loud was born in the front seat of Eric Carlyle’s car in the spring of 2006. So now, as Compete Magazine enters its 11th year, Eric and the Compete staff look back at the first ten with big smiles, acknowledging the changes in the LGBTQ sports community that prompted changes in the magazine. When we began, we used the term “gay” to describe our magazine; we also used “GLBT” and then decided on “LGBT.” Now, starting in 2017 we are using the more inclusive “LGBTQ” that reflects the wider and still growing acceptance of sports diversity. Please join our celebration throughout 2017 as we look back on our first ten years and look forward to the next ten. So just like Michael Jordan’s parents, Eric is the lucky parent of a seasoned sports pro and the Compete staff is happy to be part of this modern family. 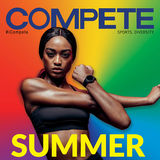