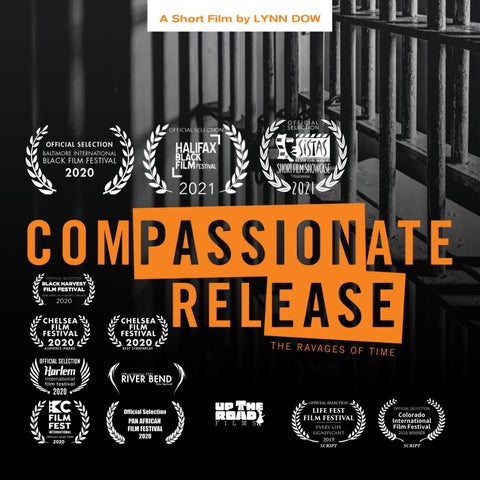 A Short Film by LYNN DOW

When Family is the

Log line: After the death of her husband, Carol is faced with raising her twin daughters alone and navigating the aftermath of tragedy. One daughter sees the world through the eyes of an elitist, while the other sees the world as a defeatist. Their journeys will be as life changing as the death that set them on this unexpected and heartbreaking course.

Synopsis: Janet and Jasmine are inseparable twin sisters raised in a loving home until their father dies. Their mother, Carol, is left with the responsibility of sole provider. Carol takes a part-time job to send Janet to a prestigious university, while her sister, Jasmine, falsely confesses to a petty crime she did not commit in order to spare her boyfriend the long sentence mandated for a repeat offender. Rather than getting a slap on the wrist, Jasmine is charged, found guilty, and imprisoned. There, Jasmine develops rapidly progressing kidney failure and becomes terminally ill. Carol and Janet fight to bring Jasmine home, so she can be surrounded by those who love her. Once self-involved and obsessed with her own path, Janet leans in and responds to the inextricable bond between twins as she dedicates herself to freeing Jasmine.

My Uncle was an inmate in a New York State prison when he became terminally ill. He was released one month before he died. My Grandmother sat at his bedside tearfully and said, “I can’t do anything for my child.” My grandmother’s pain was palpable. In her regular visits, she bore witness to prison conditions and realities. When I learned that my uncle had been sick for a while and did not receive the proper attention, I knew I wanted to shine light on sick inmates and poor healthcare in prisons. Compassionate Release is a story of family love with prison reform and social justice issues as its backdrop. Writing and making Compassionate Release allowed me to respond to my grandmother’s sense of disempowerment and hopelessness.

“...I knew I wanted to shine light on sick inmates and poor healthcare in prisons.”

Crew Lynn Dow (writer, director, producer) was born and raised in New York, New York. She became interested in filmmaking at an early age and is a graduate of Columbia University in New York. After graduating, she worked on Wall-Street before leaving to pursue her true passion, filmmaking.

Mark Mitchell (executive producer) started in the music business and crossed over to film with M2M Entertainment.

She has produced five short films and written and directed three of them. Her awards include a Best Short Script in the StoryMode International Script Awards, sixth place in the American Gem Literary Festival, a screenplay winner in the Colorado International Film Festival and numerous film festival official selections around the country.

Under his production company he has produced three short films and is currently in production with a webisode and a feature film. Mitchell is a fan of classic movies especially those made in New York.

Shortly after her grandmother’s passing, Lynn started taking Amtrak down to South Carolina. There she would craft scripts inspired by her grandmother’s birthplace. She is set to direct her first feature film, which she also wrote, in South Carolina to authenticate the plot as it evokes a spiritually rich backdrop. Lynn’s stories are of families in turmoil, set in communities that highlight their conflict and the unfailing romance of place and time.

Mitchell is a native New Yorker and graduate of City College of New York where he majored in marketing and worked closely with the film school.

Michelle Clementine (cinematographer) is a Bronx native who fell in love with photography at Urban Academy High School and pursued filmmaking at Brooklyn College. Her first project, Temple Hymns, was a short documentary filmed while studying abroad in India. In 2010, Clementine joined IATSE Local 600 where she worked as a camera assistant. With experience on shows like “House of Cards”,“She’s Gotta Have It”, “If Beale Street Could Talk”, and music videos with Cardi B, Clementine has gathered a wealth of knowledge behind the camera. Her first feature documentary, Beba, is an IFP grant winner and set for 2020 festival release. In 2018, Clementine was selected for AFI’s pilot program, Cinematography Intensive for Women.Since then, she has filmed branded content, music videos and live events.

Cast Stephanie Pope (“Carol”) is an actress, singer, dancer and a musical theater veteran with a career spanning over 35 years. Pope’s Broadway and touring credits include the revival of Pippin, for which she received an Astaire Award nomination, an ACCA Award and the beloved Legacy Robe, Chicago (Velma Kelly),Thoroughly Modern Millie (Muzzy Van Hossmere), Fosse (Leading Player), Smokey Joe’s Cafe (Brenda), A Funny Thing...Forum (Gymnasia), Kiss of The Spider Woman(Stand-by for Ms. Chita Rivera), Jelly’s Last Jam (The Hunnies) and The Will Rogers Follies... just to name a few. She holds the distinct and treasured title of being a “Fosse Dancer” and has shared the stage with such luminaries as Chita Rivera, Ben Vereen, Donna McKechnie, MariLu Henner, Gregory Hines, Brian “Stokes” Mitchell and Nathan Lane.

Sasha Boykin (“Janet”) actively works to honor and uphold a legacy of truth through storytelling. As a NYC hybrid, Sasha has found several mediums to express her art as a dancer, actor, model, and activist. With professional training in dance and theatre, she has been fortunate to study under some of the most gifted individuals and iconic organizations in NYC. Sasha has been featured in several short films, as well as national and international fashion campaigns and commercials. Breaking into the film world is a journey she is excited to embark. Sasha has found her purpose through dance, theatre, cooking, and community which she seeks to connect, elevate, and heal the world. Katrina Latour (“Warden”) has performed in all aspects of show business: including TV/Film; Commercials/ Industrials; Web Series, and also sings with several original musical acts/bands in venues all over NYC. She has studied extensively with the critically acclaimed theatre company, The Barrow Group.

Sable Boykin (“Jassy”) is a NYC native, raised by the rich, artistic abundance that Brooklyn, Queens, and Manhattan have to offer. With a background in performing arts, a passion for wellness, and social and political reform, Sable has integrated the many inspirations her surroundings and upbringing have taught her, allowing them to translate and flow through her work. She uses dance, theater, poetry, music, art, and food to connect her audience with the powerful and authentic message of the human spirit that unifies minds, build bridge, and heals.

FAQs What is Compassionate Release? Compassionate Release is a program that enables elderly and terminally ill inmates to obtain parole. The objective is to expedite medical treatment that meets accepted standard of care in the community. For those whose illness is irreversible, there is no opportunity for closure between inmate and family.

What inspired you to write Compassionate Release? My uncle was released from a New York State prison into hospice care. Double dose of suffering. From a cage to death’s door where he died a month later. He was not a hard core criminal. Petty. Sold marijuana on the streets to survive. I do not dispute that a criminal act was committed, but in the end, it’s all about forgiveness and closure. Families of inmates are like any other families dealing with loss. They wish to provide support and solace to their loved ones. My mission is to shed light on the concept of Compassionate Release. Not only do I want to honor my uncle’s memory but I want to remind those in authority that empathy and humanity are the highest principles of an honorable life.

Your Cinematographer is also a female. Was that intentional? I wouldn’t necessarily say, “intentional.” I interviewed a few cinematographers, but believed Michelle Clementine was the best to visually interpret this social justice message. We worked together beautifully. The crew allowed us to lead them. There are so many successful females in every walk of life including film. Females, in my opinion, are more ferocious and battle worthy. It’s still going to be a summit to climb for recognition whether mention is made of gender or not. The ultimate nod to female presence in the film industry would be to make the reference irrelevant. Certainly, no one is taking notice of male directors, screenwriters and cinematographers being defined as male.