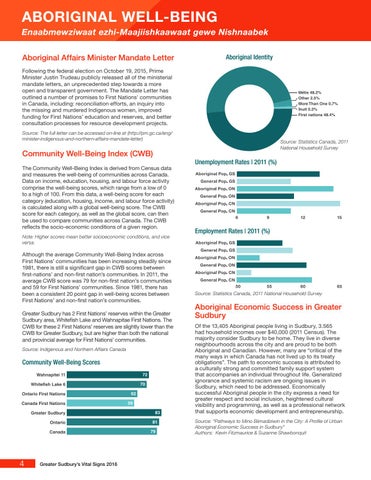 Following the federal election on October 19, 2015, Prime Minister Justin Trudeau publicly released all of the ministerial mandate letters, an unprecedented step towards a more open and transparent government. The Mandate Letter has outlined a number of promises to First Nations’ communities in Canada, including: reconciliation efforts, an inquiry into the missing and murdered Indigenous women, improved funding for First Nations’ education and reserves, and better consultation processes for resource development projects. Source: The full letter can be accessed on-line at (http://pm.gc.ca/eng/ minister-indigenous-and-northern-affairs-mandate-letter)

Community Well-Being Index (CWB) The Community Well-Being Index is derived from Census data and measures the well-being of communities across Canada. Data on income, education, housing, and labour force activity comprise the well-being scores, which range from a low of 0 to a high of 100. From this data, a well-being score for each category (education, housing, income, and labour force activity) is calculated along with a global well-being score. The CWB score for each category, as well as the global score, can then be used to compare communities across Canada. The CWB reflects the socio-economic conditions of a given region. Note: Higher scores mean better socioeconomic conditions, and vice versa.

Aboriginal Economic Success in Greater Sudbury Of the 13,405 Aboriginal people living in Sudbury, 3.565 had household incomes over $40,000 (2011 Census). The majority consider Sudbury to be home. They live in diverse neighbourhoods across the city and are proud to be both Aboriginal and Canadian. However, many are “critical of the many ways in which Canada has not lived up to its treaty obligations”. The path to economic success is attributed to a culturally strong and committed family support system that accompanies an individual throughout life. Generalized ignorance and systemic racism are ongoing issues in Sudbury, which need to be addressed. Economically successful Aboriginal people in the city express a need for greater respect and social inclusion, heightened cultural visibility and programming, as well as a professional network that supports economic development and entrepreneurship. Source: “Pathways to Mino Biimadiziwin in the City: A Profile of Urban Aboriginal Economic Success in Sudbury” Authors: Kevin Fitzmaurice &amp; Suzanne Shawbonquit 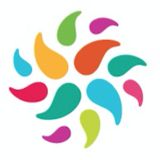