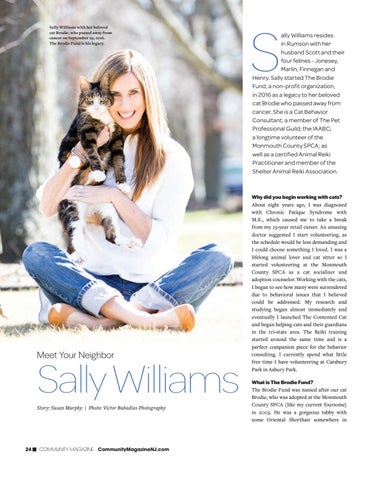 Sally Williams with her beloved cat Brodie, who passed away from cancer on September 29, 2016. The Brodie Fund is his legacy.

ally Williams resides in Rumson with her husband Scott and their four felines - Jonesey, Marlin, Finnegan and Henry. Sally started The Brodie Fund, a non-profit organization, in 2016 as a legacy to her beloved cat Brodie who passed away from cancer. She is a Cat Behavior Consultant; a member of The Pet Professional Guild; the IAABC; a longtime volunteer of the Monmouth County SPCA; as well as a certified Animal Reiki Practitioner and member of the Shelter Animal Reiki Association.

Why did you begin working with cats? About eight years ago, I was diagnosed with Chronic Fatique Syndrome with M.E., which caused me to take a break from my 25-year retail career. An amazing doctor suggested I start volunteering, as the schedule would be less demanding and I could choose something I loved. I was a lifelong animal lover and cat sitter so I started volunteering at the Monmouth County SPCA as a cat socializer and adoption counselor. Working with the cats, I began to see how many were surrendered due to behavioral issues that I believed could be addressed. My research and studying began almost immediately and eventually I launched The Contented Cat and began helping cats and their guardians in the tri-state area. The Reiki training started around the same time and is a perfect companion piece for the behavior consulting. I currently spend what little free time I have volunteering at Catsbury Park in Asbury Park. What is The Brodie Fund? The Brodie Fund was named after our cat Brodie, who was adopted at the Monmouth County SPCA (like my current foursome) in 2003. He was a gorgeous tabby with some Oriental Shorthair somewhere in 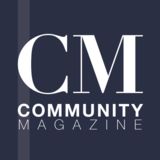