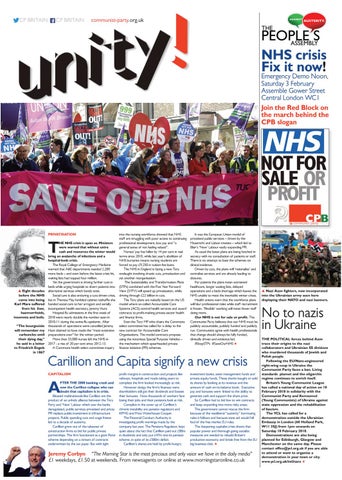 Workers of all lands, unite!

s eight decades before the Nhs came into being Karl marx suﬀered from his liver, haemorrhoids, insomnia and boils. “the bourgeoisie will remember my carbuncles until their dying day,” he said in a letter to friedrich engels in 1867

he Nhs crisis is upon us. ministers were warned that without extra cash and resources the winter would bring an avalanche of infections and a hospital-beds crisis. The Royal College of Emergency Medicine warned that A&E departments needed 2,200 more beds – and even before the latest crisis hit, waiting lists had topped four million. Yet the government is driving further cuts in beds while urging hospitals to divert patients into alternative services which barely exist. Social care is also enduring a cuts-driven crisis, but in Theresa May fumbled cabinet reshuﬄe she handed social care to her arrogant and serially incompetent health secretary, Jeremy Hunt. Hospital ﬂu admissions in the ﬁrst week of 2018 were nearly double the number seen in 2010-11 during the swine-ﬂu epidemic. After thousands of operations were cancelled Jeremy Hunt claimed to have made the “most extensive preparations ever” for the winter period. More than 33,000 nurses left the NHS in 2017 - a rise of 20 per cent since 2012-13. A Commons health select committee inquiry

into the nursing workforce showed that NHS staﬀ are struggling with poor access to continuing professional development, low pay and “a general sense of not feeling valued”. Nurses' pay has fallen by 14 per cent in real terms since 2010, while last year's abolition of NHS bursaries means nursing students are forced to pay £9,250 in tuition-fee loans. The NHS in England is facing a new Tory onslaught involving drastic cuts, privatisation and yet another reorganisation. The Sustainability and Transformation Plans (STPs) combined with the Five Year Forward View (5YFV) will speed up privatisation, while driving through £22 billion in cuts. The Tory plans are nakedly based on the US model where so-called Accountable Care Systems (ACS) control health services and award contracts to proﬁt-making private-sector health and ﬁnance ﬁrms. Even the Tory MP who chairs the Commons select committee has called for a delay to the new contract for Accountable Care Organisations. The model contracts propose using the notorious Special Purpose Vehicles – the mechanism which spearheaded private ﬁnance initiative (PFI) schemes.

It was the European Union model of privatised public services – driven by the Maastricht and Lisbon treaties – which led to Blair’s ‘New’ Labour vastly expanding PFI. As usual the latest plans are being hatched in secrecy with no consultation of patients or staﬀ. There is no attempt to base the schemes on clinical evidence. Driven by cuts, the plans will ‘rationalise’ and centralise services and are already leading to closures. For patients the plans mean worsened healthcare, longer waiting lists, delayed operations and a beds shortage which leaves the NHS unable to meet the inevitable winter crises. Health unions warn that the workforce plans will blur professional roles while staﬀ recruitment is frozen. ‘Flexible’ working will mean fewer staﬀ doing more. Our Nhs is not for sale or proﬁt. The Communist Party believes that our NHS must be publicly accountable, publicly funded and publicly run. Communists agree with health professionals that change should always be fully funded, clinically driven and evidence led. #StopSTPs #SaveOurNHS H

fter the 2008 banking crash and now the carillion collapse who can doubt that capitalism is in crisis. Bloated multinationals like Carillion are the product of an unholy alliance between the Tory Party and ‘New’ Labour which saw the banks deregulated, public services privatised and pricey PFI replace public investment in infrastructure projects. Public spending cuts and wage freeze led to a decade of austerity. Carillion grew out of the takeover of construction ﬁrms to bid for public private partnerships. The ﬁrm functioned as a giant Ponzi scheme depending on a stream of contracts underwritten by the tax payer. But with tight

proﬁt margins in construction and projects like railways, hospitals and roads taking years to complete the ﬁrm looked increasingly at risk. However dodgy the ﬁrm’s ﬁnances were shareholders still got their dividends and bosses their bonuses. Now thousands of workers face losing their jobs and their pensions look at risk. Complicit in the cover up of Carillion’s chronic instability are pension regulators and KPMG and Price Waterhouse Cooper. The Financial Conduct Authority is investigating proﬁt warnings made by the company last year. The Pensions Regulator, kept quiet about the fact that Carillion paid out £80m in dividends and only put £47m into its pension scheme, in spite of its £580m deﬁcit. Carillion’s shares are held by proﬁt-hungry

investment banks, asset management funds and private equity funds. These sharks bought or sold its shares by looking at its revenue and the amount of cash on its balance book.  Executive pay and bonuses were linked to the ability to generate cash and support the share price.  So Carillion had to bid low to win contracts and keep expanding into more risky areas.  The government cannot rescue the ﬁrm because of the neoliberal “austerity” borrowing rules it follows and because state aid would fall foul of the free market EU rules. The deepening capitalist crisis shows that popular power and thorough going socialist measures are needed to rebuild Britain’s productive economy and break free from the EU big business club. H

Jeremy corbyn “The Morning Star is the most precious and only voice we have in the daily media” £1 weekdays, £1.50 at weekends. From newsagents or online at www.morningstaronline.co.uk

No to nazis in Ukraine the pOlitical forces behind azov trace their origins to the nazi collaborators and Ukrainian ss divisions who murdered thousands of Jewish and polish people following the eU/Nato-engineered right-wing coup in Ukraine the communist party faces a ban. living standards plumet and the oligarchic regime continues to enrich itself. Britain’s Young communist league has called a national day of action on 10 february 2018 in solidarity with the communist party and Komsomol (Young communists) of Ukraine against state oppression and the rehabilitation of fascism. the Ycl has called for a demonstration outside the Ukrainian embassy in london (60 holland park, W11 3sJ) from 1pm onwards on saturday 10 february 2018. Demonstrations are also being planned for edinburgh, Glasgow and manchester on the same day. please contact oﬃce@ycl.org.uk if you are able to attend or want to organise a demonstration in your town or city. www.ycl.org.uk/intl/saru H

Hands up who’s got business interests that will profit from a privatised NHS.

s The Woman Worker was Nadezhda Krupskaya’s ﬁrst pamphlet, written in Siberia where she had joined Lenin, following their arrest in 1896 and sentencing to three years internal exile. It was the ﬁrst work by a marxist on the situation of women in Russia. £3.50 €4

he crisis in healthcare is europewide. the pace of market-driven healthcare ‘reform’ has speeded up since capitalism’s 2008 crash as neo-liberal governments – with both conservative and social democratic labels – have imposed the costs of saving the banks on working people. Public health services with their massive property holdings, substantial staﬀ numbers and massive cost streams are a tempting target for cuts and privatisation. Even the pro-EU European Trade Union Institute (ETUI) pointed out that “…EU institutions are calling for major healthcare reforms as a means of consolidating public expenditure.” Countries under the cosh – like Greece – or others “in receipt of ﬁnancial assistance” get no choice but to implement these ‘reforms’ and are obliged to do as they are told in their respective Memorandums of Understanding (MoU). As the ETUI says: “Other member states too have been encouraged to undertake reforms to their national healthcare systems. While initially the encouragement was issued in the form of ‘recommendations’, these have,

under the most recent changes in European economic governance, become increasingly tantamount to ‘instructions’.” Decisions of the European Court of Justice and the European Commission mean that services delivered by national health systems are now considered to be economic activities, and EU rules on the internal market (free movement of goods, persons, capital and services), public procurement and state aid, increasingly apply to healthcare services. A 2011 European Commission directive on cross-border health care, drawing on internal market rules, presented this as an expansion of ‘choice’ for patients. With parliament packed with MPs with business interests in private healthcare and Brussels overrun with corporate lobbyists, the drive to a privatised health service is gathering speed. For working people – patients and staff – this is a growing danger. Driving ‘shareholder value’ means worsening working conditions, with lower pay, lower staff levels, bigger workloads and increased stress. Private health service providers ‘cherrypick’ lower-risk and paying patients, leaving the public sector to pick up poorer patients and those most at risk. H

the laBOUr movement should beware the drive to present continuing alignment with the eU single market as a ‘unifying’ post-Brexit policy, Britain’s communists have warned. General secretary Robert Griffiths branded it “a ‘one-nation’ Tory and big business approach that would obstruct the progressive All MPs in the last two policies of a future Labour government.” He told the party’s political committee that parliaments EU single-market rules enforced by the overbearing EU Commission and the unaccountable European Central Bank would not only stop Britain negotiating its own economic relations with other developed and third-world countries, but would also restrict or outlaw many of the measures in Labour's general-election manifesto. Single-market rules are at odds with statebacked infrastructure investment, aid for industry, VAT reform, fairer public procurement policies, renationalisation of the railways and water supply and a regulated labour market that puts an end to superexploitation. The party reiterated its support for a ‘people’s exit’ from the EU, with no submission to EU single-market rules, a minimum divorce bill and regulation of the movement of capital and labour rather than a ‘capitalist free market to maximise corporate Ruskin House profit’. 23 Coombe Road Britain’s communists are approaching other Croydon CR01BD left and labour-movement forces to Editorial team: reinvigorate campaigning for an EU exit Derek Kotz, settlement which respects popular Anita Halpin, sovereignty and safeguards the rights and Deirdre O’Neil, powers of a future Labour government.H Nick Wright

Kar marX marx memorial library celebrates marx's 200th birthday with an international conference on 5 may at sOas, University of london. Speakers include: John mcDonnell mp, the Shadow Chancellor; sarah mosoeta, professor of sociology at the National Institute for the Humanities & Social Sciences, Johannesburg; isabel monal, editor of the Cuban theoretical journal Marx Ahora; David mclellan, visiting professor of political theory at Goldsmith College; Ben fine, professor of economics at the School of Oriental and African Studies; John O’Neill, professor of political economy at Manchester University; ian Gough, visiting professor at the London School of Economics; sitaram Yechury, leader of the Communist Party of India (Marxist) plus speakers from the Chinese Academy of Social Sciences and the Rosa Luxemburg Foundation. Plenaries examine Marx’s contribution to: H political economy and its relevance today – why Marx was right; H philosophy and human development – Marxism and the battle of ideas; H the international role of the working-class movement – Marxism as a force for change Break-out sessions will address a broad range of themes including: H class, race and gender; H neoliberalism and austerity; H Marxism and the environment H nationalism and populism; H artiﬁcial intelligence and social media; H Marxism and culture H state power and the power of the state H Marxism and the present as history Tickets for the event available at www.marx-memorial-library.orgH

s A century ago the British labour movement prepared to take industrial action in defence of the young Soviet Union. John Foster examines the militancy in 1920 in the context of ruling class divisions, Soviet power, the Irish rising and the formation of the CPGB. £4 €4.50

3 s an introductory course on marxism A basic course in marxist philosophy. This publication is dedicated to the memory of Kevin Halpin (1927-2017), the outstanding workers’ leader, chair of Liaison Committee for the Defence of Trade Unions. £2 €2 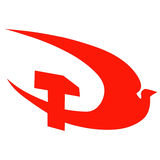