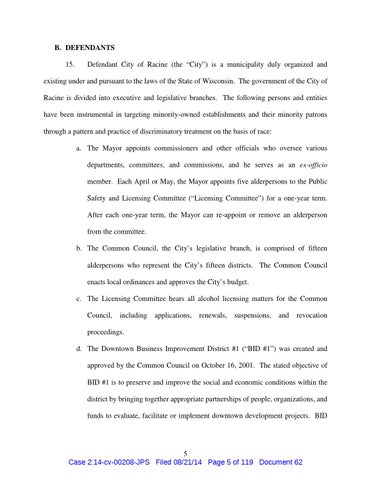 existing under and pursuant to the laws of the State of Wisconsin. The government of the City of Racine is divided into executive and legislative branches. The following persons and entities have been instrumental in targeting minority-owned establishments and their minority patrons through a pattern and practice of discriminatory treatment on the basis of race: a. The Mayor appoints commissioners and other officials who oversee various departments, committees, and commissions, and he serves as an ex-officio member. Each April or May, the Mayor appoints five alderpersons to the Public Safety and Licensing Committee (“Licensing Committee”) for a one-year term. After each one-year term, the Mayor can re-appoint or remove an alderperson from the committee. b. The Common Council, the City’s legislative branch, is comprised of fifteen alderpersons who represent the City’s fifteen districts. The Common Council enacts local ordinances and approves the City’s budget. c. The Licensing Committee hears all alcohol licensing matters for the Common Council,

proceedings. d. The Downtown Business Improvement District #1 (“BID #1”) was created and approved by the Common Council on October 16, 2001. The stated objective of BID #1 is to preserve and improve the social and economic conditions within the district by bringing together appropriate partnerships of people, organizations, and funds to evaluate, facilitate or implement downtown development projects. BID

Holmes vs The City of Racine, Discrimination and RICO Lawsuit