The Possibility of Emancipating Architecture - Categories of Estrangement - Katja Hogenboom 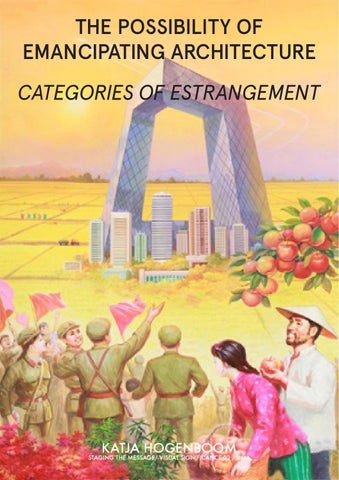 THE POSSIBILITY OF EMANCIPATING ARCHITECTURE CATEGORIES OF ESTRANGEMENT

The image you see here is part of a series, as was the image on the first page: This image is the product of artists from a North Korean painting unit – the very same that used to produce such propaganda images for the Kim regime, but now find themselves designing food packaging in Pyongyang. It is part of series of six paintings produced for an exhibition called The Beautiful Future by British expat duo Nick Bonner and Dominic Johnson-Hill, who both arrived in the Chinese capital 20 years ago. They commission these North Korean artists to make these images, based on drawings and renderings of these then not yet build building. Allowing them to finish the surroundings as they saw fit. “North Korean artists are the best people at delivering a message without slogans,” says Bonner, “We wanted to show contemporary China as it could have been, if it had continued with Maoist ideology.”

The possibility of future urban forms seems to release a vast array of both utopian and dystopian energies. The most interesting cases of this are those that manage to include both of these vectors, play them off against each other and thus generate a profound insecurity that allows us to enter into a “beyond-good-and-evil” experience – not in order to remain there, but to use this levelling or willing suspension of previous aesthetic beliefs and socio-cultural hierarchies as a means to grasp what is emergent instead of residual in our present.

The research investigates how architecture, which is a very particular spatial and aesthetic experiential device, through ‘categories of estrangement’ can be transformative, emancipating and create new imaginaries. Specifically it investigates the emancipatory as that which can transform through different techniques of estrangement, the building’s autonomy, its presence and its representation. Using different architectural case studies, the research looks at how spatial and aesthetic techniques (e.g., devices such as windows, facades, colour, the building envelope, the plan, the section) through different scales – from object to city –, can estrange, mobilise/ provoke/ install emancipatory alternatives and situated freedoms.

ESTRANGEMENT I will shorty explain what my notion of estrangement is about. Estrangement is a technique that originates in literary semiotics and the theatre of Bertolt Brecht. It was coined by the Russian Formalist Viktor Shklovsky, ‘ostranenie’ translated as defamiliarization or estrangement - to suggest both distancing (dislocating) and making strange.

“By making things strange, the artist does not simply displace them from an everyday context into an artistic framework; he also helps to ‘return sensation’ to life itself, to reinvent the world, to allow the observer to experience anew. Estrangement is what makes art artistic; but by the same token, it makes life lively, or worth living” Estrangement for Shklovsky was never from the world but rather an estrangement for sake of the world’s renewal. In that sense estrangement is a method that operates from within. It does not negate reality, or its conventions, but transforms them. I see estrangement as a technique to open fixed conditions (power relations and cliché’s) as an architectural technique to come to a different social reality. OPPORTUNISTIC OPTIMISM My research is interested in practices that accept “opportunistically” the current condition, with the believe that change can only come from within, making dirty hands while proposing critically something other, a new imaginary,

‘beyond good and evil’. By interrupt-

ing, or even the structures of power as Susan Buck-Morss explains in her article ‘What is Political Art?’ Politics should be about making peace, (…) in an awareness that certain structures of social life make peace impossible: by their very nature they pit classes, or sexes, or race or nations against each other.

It is these structures that need to be attacked; in their everyday banality (…) the time of this avant-garde is not progress, but interruption – stopping time- from within! At the same time the research understands that there is as Jan van Toorn explains a paradoxical relationship between thinking and making. He quotes Rem Koolhaas: ‘I make the mistakes that the theoretician does not want to make.’ (…) And van Toorn continues It is precisely the acceptance of the ‘speculative inadequacy’ and it recalcitrant way of dealing with the conditions of the communicative reality that create scope for new phenomenal forms that invite spectators and readers to the work all over again and to make of it what they want. I believe that partial views, imperfections and unfinishedness, room for surprise and irony as being part of the knowledge production, the being part of the world, instead of viewing from a distance, conversations instead of a universal monologues, living with contradictions and opening up the cliché of the binary distinction, by the activation of the object as knowledge is what is important. This what I call an ‘opportunistic optimism’ approach delays judgment (from an ideal idea, or critique in advance) as long as possible: you analyse; see what is there without prejudice, map it, operate within it to see its transforming possibilities in situ. And you believe that working from within, the everyday, (including its cyborg, artificial, virtual, media, popular transformations) can give situated freedom a chance to blossom. Not negotiation, but possibilities from within are mobilised. Not the formulation of ideas that once applied in reality can only disappoint, but what reality has to offer can change the world.

IMAGE NOT VISUAL: THE CCTV HEADQUARTERS

To understand architecture, we look at the relational aspects, what architecture produces through its participatory (programmatic) potential. These performative criteria are important, but also the way the autonomous object, the imaginative presence and potential of the form, itself produces political effects/ forms/ aesthetics/ images to “foster new fields of reference’ , is essential to take into account, since without autonomous presence there can be no relations. Architecture is both about relations, and about representation and presence of the object and its appearance. Helpful to clarify what another ‘representation’ could be, what you can call a dialogical one, is the distinction Serge Daney makes between the visual and the image.

The visual is the optical verification of a procedure of power (technological, political, advertising or military power) the verification that something functions. In that sense, clichés and stereotypes are part of the visual. If the visual keeps us from seeing (because it prefers that we decode, that we decipher, that we ‚read’), the image always challenges us to carry out montage with others, with some other. Because in the image, as in democracy, there is ‚free play’, unfinished pieces, gaps, openings. This is what I belief is at stake when we look at the image that the China Central Television Headquarters (CCTV) is producing. To unpack the issue of representations, to surpass the dialectical trap of either presence or representation, we need other images. An image, that holds out the only one way of seeing, that challenges us to think different, to open for a possible other world. The CCTV building resists the celebration of the media house as just another icon (brand), and favours a much more dynamic understanding of its representation. The CCTV building as icon represents the power and media in China, but through its changing loop-form is at the same time deflating this image. It does not provide

representations of the CCTV in different media

power in China an easy icon. Both on content and on a formal level the conflation of different media (loop, program, construction, tectonics, scale, bigness) produces a fundamental dissymmetry between media, provoking a distortion or destabilisation of identification and representation. Will analysing the CCTV building I have collected all kind of paraphernalia related to the CCTV, from real estate folders laying around in hotel lobbies, Chinese television news presentations of the building and the building process, the endless production of CCTV souvenirs, and what struck me was they all portray the CCTV from the same perspective; As a â&amp;#x20AC;&amp;#x2DC;stableâ&amp;#x20AC;&amp;#x2122; building, with a platform base, two towers, slightly twisted and a connection at the top. While the actual experience of this loop, from the street, is in fact very unstable. The loop is a visual effect, no skyscraper, establishing an urban site, rather than a point to the sky. It challenges you to rethink it from every position you see it, its sculptural effect with its constant changing appearance, being a Z, I or otherwise estranging formation in relation to its environment. As audience you become a participant in asking what it is doing. As audience you become a participant in asking what it is doing.

When I published my last book, Content, in 2003, one chapter was called ‘Kill the Skyscraper,’” said Koolhaas, who received the award for CCTV. “Basically it was an expression of disappointment at the way the skyscraper typology was used and applied. I didn’t think there was a lot of creative life left in skyscrapers. Therefore, I tried to launch a campaign against the skyscraper in its more uninspired form. “The fact that I am standing on this stage now, in this position, meant that my declaration of war went completely unnoted, and that my campaign was completely unsuccessful,” Koolhaas joked, concluding, “Being here, it is quite moving - to be part of a community that is trying to make skyscrapers more interesting. I am deeply grateful, and thank all my partners.” rem Koolhaas November 7, 2013

The Possibility of Emancipating Architecture - Categories of Estrangement - Katja Hogenboom