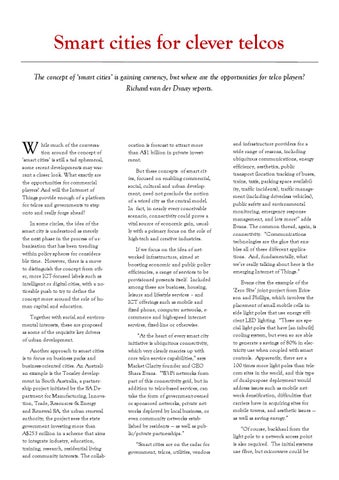 Smart cities for clever telcos The concept of ‘smart cities’ is gaining currency, but where are the opportunities for telco players? Richard van der Draay reports.

hile much of the conversation around the concept of ‘smart cities’ is still a tad ephemeral, some recent developments may warrant a closer look. What exactly are the opportunities for commercial players? And will the Internet of Things provide enough of a platform for telcos and governments to step onto and really forge ahead? In some circles, the idea of the smart city is understood as merely the next phase in the process of urbanisation that has been trending within policy spheres for considerable time. However, there is a move to distinguish the concept from other, more ICT-focused labels such as intelligent or digital cities, with a noticeable push to try to define the concept more around the role of human capital and education. Together with social and environmental interests, these are proposed as some of the requisite key drivers of urban development. Another approach to smart cities is to focus on business parks and business-oriented cities. An Australian example is the Tonsley development in South Australia, a partnership project initiated by the SA Department for Manufacturing, Innovation, Trade, Resources & Energy and Renewal SA, the urban renewal authority; the project sees the state government investing more than A$253 million in a scheme that aims to integrate industry, education, training, research, residential living and community interests. The collab-

oration is forecast to attract more than A$1 billion in private investment. But these concepts of smart cities, focused on enabling commercial, social, cultural and urban development, need not preclude the notion of a wired city as the central model. In fact, in nearly every conceivable scenario, connectivity could prove a vital source of economic gain, usually with a primary focus on the role of high-tech and creative industries. If we focus on the idea of networked infrastructure, aimed at boosting economic and public policy efficiencies, a range of services to be provisioned presents itself. Included among these are business, housing, leisure and lifestyle services – and ICT offerings such as mobile and fixed phone, computer networks, ecommerce and high-speed internet services, fixed-line or otherwise. “At the heart of every smart city initiative is ubiquitous connectivity, which very clearly marries up with core telco service capabilities,” says Market Clarity founder and CEO Shara Evans. “Wi-Fi networks form part of this connectivity grid, but in addition to telco-based services, can take the form of government-owned or sponsored networks, private networks deployed by local business, or even community networks established by residents — as well as public/private partnerships.” “Smart cities are on the radar for government, telcos, utilities, vendors

and infrastructure providers for a wide range of reasons, including ubiquitous communications, energy efficiency, aesthetics, public transport (location tracking of buses, trains, taxis, parking space availability, traffic incidents), traffic management (including driverless vehicles), public safety and environmental monitoring, emergency response management, and lots more!” adds Evans. The common thread, again, is connectivity. “Communications technologies are the glue that enables all of these different applications. And, fundamentally, what we’re really talking about here is the emerging Internet of Things.” Evans cites the example of the ‘Zero Site’ joint project from Ericsson and Phillips, which involves the placement of small mobile cells inside light poles that use energy efficient LED lighting. “These are special light poles that have [an inbuilt] cooling system, but even so are able to generate a savings of 80% in electricity use when coupled with smart controls. Apparently, there are a 100 times more light poles than telecom sites in the world, and this type of dual-purpose deployment would address issues such as mobile network densification, difficulties that carriers have in acquiring sites for mobile towers, and aesthetic issues — as well as saving energy.” “Of course, backhaul from the light pole to a network access point is also required. The initial systems use fibre, but microwave could be 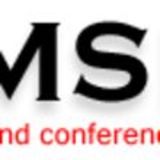 The August 2014 edition of CommsDay magazine

The August 2014 edition of CommsDay magazine