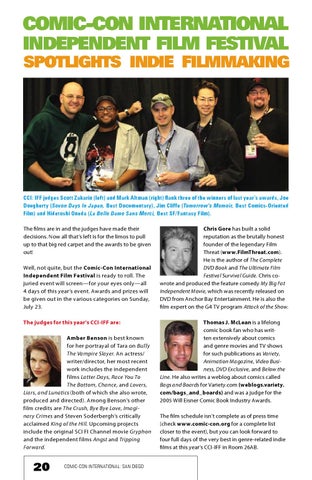 CCI: IFF judges Scott Zakarin (left) and Mark Altman (right) ﬂank three of the winners of last year’s awards, Joe Dougherty (Seven Days In Japan, Best Documentary), Jim Cliffe (Tomorrow’s Memoir, Best Comics-Oriented Film) and Hidetoshi Oneda (La Belle Dame Sans Merci, Best SF/Fantasy Film). The ﬁlms are in and the judges have made their decisions. Now all that’s left is for the limos to pull up to that big red carpet and the awards to be given out! Well, not quite, but the Comic-Con International Independent Film Festival is ready to roll. The juried event will screen—for your eyes only—all 4 days of this year’s event. Awards and prizes will be given out in the various categories on Sunday, July 23. The judges for this year’s CCI-IFF are: Amber Benson is best known for her portrayal of Tara on Buffy The Vampire Slayer. An actress/ writer/director, her most recent work includes the independent films Latter Days, Race You To The Bottom, Chance, and Lovers, Liars, and Lunatics (both of which she also wrote, produced and directed). Among Benson’s other film credits are The Crush, Bye Bye Love, Imaginary Crimes and Steven Soderbergh’s critically acclaimed King of the Hill. Upcoming projects include the original SCI FI Channel movie Gryphon and the independent films Angst and Tripping Forward.

Chris Gore has built a solid reputation as the brutally honest founder of the legendary Film Threat (www.FilmThreat.com). He is the author of The Complete DVD Book and The Ultimate Film Festival Survival Guide. Chris cowrote and produced the feature comedy My Big Fat Independent Movie, which was recently released on DVD from Anchor Bay Entertainment. He is also the ﬁlm expert on the G4 TV program Attack of the Show. Thomas J. McLean is a lifelong comic book fan who has written extensively about comics and genre movies and TV shows for such publications as Variety, Animation Magazine, Video Business, DVD Exclusive, and Below the Line. He also writes a weblog about comics called Bags and Boards for Variety.com (weblogs.variety. com/bags_and_boards) and was a judge for the 2005 Will Eisner Comic Book Industry Awards. The ﬁlm schedule isn’t complete as of press time (check www.comic-con.org for a complete list closer to the event), but you can look forward to four full days of the very best in genre-related indie ﬁlms at this year’s CCI-IFF in Room 26AB. 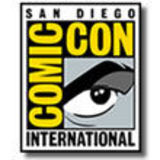