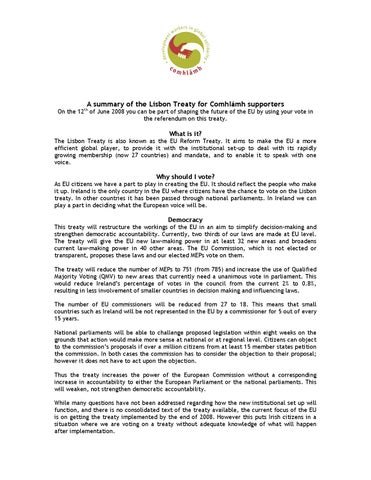 A summary of the Lisbon Treaty for Comhlámh supporters On the 12th of June 2008 you can be part of shaping the future of the EU by using your vote in the referendum on this treaty.

What is it? The Lisbon Treaty is also known as the EU Reform Treaty. It aims to make the EU a more efficient global player, to provide it with the institutional set-up to deal with its rapidly growing membership (now 27 countries) and mandate, and to enable it to speak with one voice.

Why should I vote? As EU citizens we have a part to play in creating the EU. It should reflect the people who make it up. Ireland is the only country in the EU where citizens have the chance to vote on the Lisbon treaty. In other countries it has been passed through national parliaments. In Ireland we can play a part in deciding what the European voice will be.

Democracy This treaty will restructure the workings of the EU in an aim to simplify decision-making and strengthen democratic accountability. Currently, two thirds of our laws are made at EU level. The treaty will give the EU new law-making power in at least 32 new areas and broadens current law-making power in 40 other areas. The EU Commission, which is not elected or transparent, proposes these laws and our elected MEPs vote on them. The treaty will reduce the number of MEPs to 751 (from 785) and increase the use of Qualified Majority Voting (QMV) to new areas that currently need a unanimous vote in parliament. This would reduce Ireland’s percentage of votes in the council from the current 2% to 0.8%, resulting in less involvement of smaller countries in decision making and influencing laws. The number of EU commissioners will be reduced from 27 to 18. This means that small countries such as Ireland will be not represented in the EU by a commissioner for 5 out of every 15 years. National parliaments will be able to challenge proposed legislation within eight weeks on the grounds that action would make more sense at national or at regional level. Citizens can object to the commission’s proposals if over a million citizens from at least 15 member states petition the commission. In both cases the commission has to consider the objection to their proposal; however it does not have to act upon the objection. Thus the treaty increases the power of the European Commission without a corresponding increase in accountability to either the European Parliament or the national parliaments. This will weaken, not strengthen democratic accountability. While many questions have not been addressed regarding how the new institutional set up will function, and there is no consolidated text of the treaty available, the current focus of the EU is on getting the treaty implemented by the end of 2008. However this puts Irish citizens in a situation where we are voting on a treaty without adequate knowledge of what will happen after implementation.

Development The EU’s overarching development aim of eradicating poverty is enshrined in the treaty. The treaty will create a new post of the High Representative of Foreign Affairs which will combine two current roles and coordinate all of the EU’s external policies, offering the potential for greater coherence. However, its mandate stresses the centrality of Security issues, not Development. There is the danger that the aim is to improve coherence in the area of Security, and that development concerns could get sidelined and marginalised. According to critics this presents the risk that EU development funds may be diverted to finance EU foreign policy objectives. The reduction of overall commissioners means furthermore that there is no guarantee of a permanent Commissioner for Development.

Aid The treaty repeats the EU commitment to the Millennium Development Goals (MDGs) and to reaching the target of giving 0.7% of GNP in overseas aid. However the treaty does not include any concrete plans on how to implement these aspirations. Currently the average spending within the EU on aid is 0.3% and most countries are not on track to achieve 0.7% by 2010. The treaty aims to ensure that EU states coordinate their aid and make it more effective. Ireland will still be able to agree on bilateral aid agreements with developing countries.

Trade The Lisbon Treaty clearly enshrines the current pro-liberalisation approach of the European Union as it puts into legislation that “all restrictions on the movement of capital between Member States and between Member States and third countries shall be prohibited” (Art 56), regardless of the end results for development, consumer rights, or environmental standards. Furthermore the treaty adds to the range of trade decisions that are already made at EU level, speeds up some trade decisions at EU level (through more QMV), and expands the powers of the unelected Trade Commissioner. Under the terms of the treaty, the trade commission will see its remit increased to cover the issues of investment and intellectual property (areas many developing countries do not want to liberalise) as well as further aspects of trade in services, in addition to its existing competence on goods trade. Comhlamh has been campaigning against this approach for the last 10 years.

Military The treaty commits member states to spending more on defence and to allowing the EU to use their military and civilian facilities for military purposes. Member states can form a military alliance within the EU and use EU resources for these military actions. Other member states who are not participating are not involved in this alliance – in action, discussion, or voting however their resources may be used, and there is a risk that these alliances will be widely viewed as an EU force.

How do I vote? The referendum will be held on Thursday the 12th of June 2008. 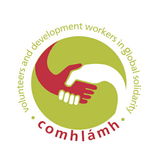