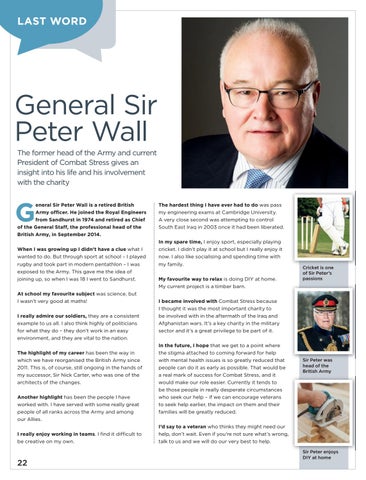 eneral Sir Peter Wall is a retired British Army officer. He joined the Royal Engineers from Sandhurst in 1974 and retired as Chief of the General Staff, the professional head of the British Army, in September 2014. When I was growing up I didn’t have a clue what I wanted to do. But through sport at school – I played rugby and took part in modern pentathlon – I was exposed to the Army. This gave me the idea of joining up, so when I was 18 I went to Sandhurst. At school my favourite subject was science, but I wasn’t very good at maths! I really admire our soldiers, they are a consistent example to us all. I also think highly of politicians for what they do – they don’t work in an easy environment, and they are vital to the nation. The highlight of my career has been the way in which we have reorganised the British Army since 2011. This is, of course, still ongoing in the hands of my successor, Sir Nick Carter, who was one of the architects of the changes. Another highlight has been the people I have worked with. I have served with some really great people of all ranks across the Army and among our Allies. I really enjoy working in teams. I find it difficult to be creative on my own.

The hardest thing I have ever had to do was pass my engineering exams at Cambridge University. A very close second was attempting to control South East Iraq in 2003 once it had been liberated. In my spare time, I enjoy sport, especially playing cricket. I didn’t play it at school but I really enjoy it now. I also like socialising and spending time with my family. My favourite way to relax is doing DIY at home. My current project is a timber barn.

Cricket is one of Sir Peter’s passions

I became involved with Combat Stress because I thought it was the most important charity to be involved with in the aftermath of the Iraq and Afghanistan wars. It’s a key charity in the military sector and it’s a great privilege to be part of it. In the future, I hope that we get to a point where the stigma attached to coming forward for help with mental health issues is so greatly reduced that people can do it as early as possible. That would be a real mark of success for Combat Stress, and it would make our role easier. Currently it tends to be those people in really desperate circumstances who seek our help – if we can encourage veterans to seek help earlier, the impact on them and their families will be greatly reduced.

Sir Peter was head of the British Army

I’d say to a veteran who thinks they might need our help, don’t wait. Even if you’re not sure what’s wrong, talk to us and we will do our very best to help. Sir Peter enjoys DIY at home 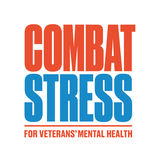 The magazine for the UK's leading veterans' mental health charity.

The magazine for the UK's leading veterans' mental health charity.