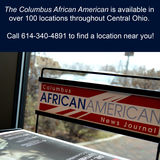 A Pandemic Within a Pandemic: ...

The anger we witnessed again today in the streets of Columbus was not triggered by a single event but rather a result of continuous structural racism Black people face every single day of their lives. We stand in solidarity with those who have recently lost their lives to the police and anti-Black violence, Breanna Taylor, Ahmaud Arbery, Tony McDade, and George Floyd, and we lift up the names of those who have been murdered by the Columbus Police: Henry Green, Ty’re King, Kareem Jones, Tasjon Tyreek Osbourne, Abdirahman Salad, Julius Tate, and many more.

Too many Black people in Columbus have been brutalized and killed by Columbus police and we all have an obligation to hear their outrage, to honor their pain, and to demand action that indicates that we believe their #BlackLivesMatter.

Columbus Police have escalated unrest, pepper spraying thousands of peaceful protesters, utilizing sound weapons, rubber bullets and concussion grenades against them. Even the most prominent Black elected officials in central Ohio, US Congresswoman Joyce Beatty, Columbus City Council President Shannon Hardin and Franklin County Commissioner Kevin Boyce were not protected from CPDs aggressive repression, as they were pepper sprayed while engaging peacefully with their constituents.

There must be accountability and justice or there will be no peace. Mayor Andrew Ginther has issued calls for unity while doing little to indicate his willingness to take action to protect Black lives in Columbus. After the Columbus community organized, protested and demanded action in response to CPD killings of Black members of our community, Mayor Ginther created a Community Safety Advisory Commission which studied Columbus’s long history of police misconduct, excessive force, and racism within the department and out in the community. This Commission spent months developing 80 recommendations, the majority of which sit unimplemented and unenforced.

Below is a list of immediate demands that come directly from recommendations within the Commission’s Report .

In addition to immediately releasing

against him and all protesters held after recent events, we demand the city of Columbus take action now on their own recommendations, beginning with:

2. Recommendation 37: Require a signed Morality Clause for all officers that requires officers to agree to equal protection for all citizens, to denounce any cultural supremacist groups, and to report any officer’s malfeasance to Internal Affairs.

4. Recommendation 72: Implement a process for independent investigation of 1) officer use of force, including but not limited to, officer use of force resulting in death, officer involved shootings, and in-custody injuries and deaths; and 2) complaints about serious Columbus Division of Police officer misconduct. 5. Recommendation 76: The city should have an internal whistleblower “hotline” or access- point that can allow anonymous submissions from officers of abuse, racism, harassment, etc.

6. Recommendation 19: The CDP Training Academy should add and integrate specific language into training curriculum regarding crowd control that specifically addresses citizen’s individual civil rights, including First Amendment rights and the right to protest, specifically relating to non-aggressive police tactics for non-violent protests/ marches. This should also include the opportunities created to increase city/citizen engagement while allowing police to protect rather than using unnecessary violent tactics during non-violent situations.

8. Recommendation 28: Integrate into each training module the impact of implicit and/or explicit bias, including racism, and strategies for officers to use in recognizing and mitigating their own biases.

9. Recommendation 22: Officers should be trained on how to modify behavior to deescalate situations with youth.

10. Recommendation 29: Integrate into each training module the impact of cultural competence and strategies for officers to use to ensure the equitable treatment of persons regardless of background.

This story is from:
June 2020 Edition
by Columbus African American News Journal