The Philosopher's Plant, by Michael Marder 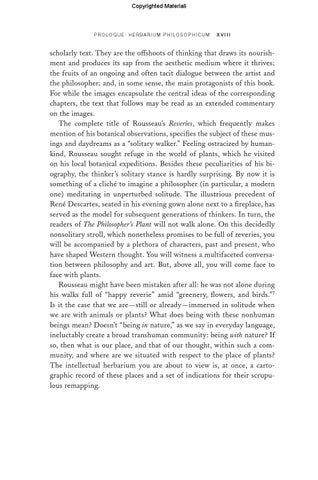 scholarly text. They are the offshoots of thinking that draws its nourishment and produces its sap from the aesthetic medium where it thrives; the fruits of an ongoing and often tacit dialogue between the artist and the philosopher; and, in some sense, the main protagonists of this book. For while the images encapsulate the central ideas of the corresponding chapters, the text that follows may be read as an extended commentary on the images. The complete title of Rousseau’s Reveries, which frequently makes mention of his botanical observations, specifies the subject of these musings and daydreams as a “solitary walker.” Feeling ostracized by humankind, Rousseau sought refuge in the world of plants, which he visited on his local botanical expeditions. Besides these peculiarities of his biography, the thinker’s solitary stance is hardly surprising. By now it is something of a cliché to imagine a philosopher (in particular, a modern one) meditating in unperturbed solitude. The illustrious precedent of René Descartes, seated in his evening gown alone next to a fireplace, has served as the model for subsequent generations of thinkers. In turn, the readers of The Philosopher’s Plant will not walk alone. On this decidedly nonsolitary stroll, which nonetheless promises to be full of reveries, you will be accompanied by a plethora of characters, past and present, who have shaped Western thought. You will witness a multifaceted conversation between philosophy and art. But, above all, you will come face to face with plants. Rousseau might have been mistaken after all: he was not alone during his walks full of “happy reverie” amid “greenery, flowers, and birds.”7 Is it the case that we are—still or already—immersed in solitude when we are with animals or plants? What does being with these nonhuman beings mean? Doesn’t “being in nature,” as we say in everyday language, ineluctably create a broad transhuman community: being with nature? If so, then what is our place, and that of our thought, within such a community, and where are we situated with respect to the place of plants? The intellectual herbarium you are about to view is, at once, a cartographic record of these places and a set of indications for their scrupulous remapping.

The Philosopher's Plant, by Michael Marder

Read "Herbarium Philosophicum," the prologue to "The Philosopher's Plant: An Intellectual Herbarium," by Michael Marder 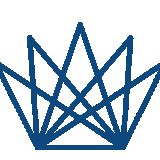