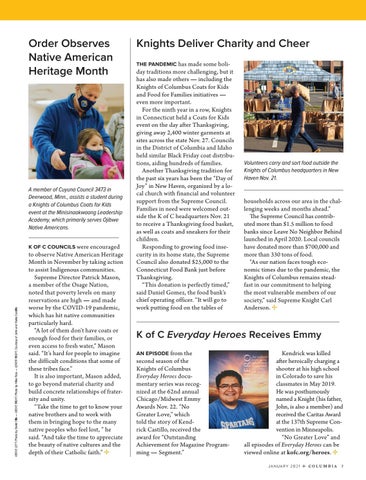 A member of Cuyuna Council 3473 in Deerwood, Minn., assists a student during a Knights of Columbus Coats for Kids event at the Minisinaakwaang Leadership Academy, which primarily serves Ojibwe Native Americans.

ABOVE LEFT: Photo by David Ellis — ABOVE RIGHT: Photo by Mike Ross — LOWER RIGHT: Courtesy of John and Maria Castillo

K OF C COUNCILS were encouraged

to observe Native American Heritage Month in November by taking action to assist Indigenous communities. Supreme Director Patrick Mason, a member of the Osage Nation, noted that poverty levels on many reservations are high — and made worse by the COVID-19 pandemic, which has hit native communities particularly hard. “A lot of them don’t have coats or enough food for their families, or even access to fresh water,” Mason said. “It’s hard for people to imagine the difficult conditions that some of these tribes face.” It is also important, Mason added, to go beyond material charity and build concrete relationships of fraternity and unity. “Take the time to get to know your native brothers and to work with them in bringing hope to the many native peoples who feel lost, ” he said. “And take the time to appreciate the beauty of native cultures and the depth of their Catholic faith.” B

Knights Deliver Charity and Cheer THE PANDEMIC has made some holi-

day traditions more challenging, but it has also made others — including the Knights of Columbus Coats for Kids and Food for Families initiatives — even more important. For the ninth year in a row, Knights in Connecticut held a Coats for Kids event on the day after Thanksgiving, giving away 2,400 winter garments at sites across the state Nov. 27. Councils in the District of Columbia and Idaho held similar Black Friday coat distributions, aiding hundreds of families. Another Thanksgiving tradition for the past six years has been the “Day of Joy” in New Haven, organized by a local church with financial and volunteer support from the Supreme Council. Families in need were welcomed outside the K of C headquarters Nov. 21 to receive a Thanksgiving food basket, as well as coats and sneakers for their children. Responding to growing food insecurity in its home state, the Supreme Council also donated $25,000 to the Connecticut Food Bank just before Thanksgiving. “This donation is perfectly timed,” said Daniel Gomez, the food bank’s chief operating officer. “It will go to work putting food on the tables of

Volunteers carry and sort food outside the Knights of Columbus headquarters in New Haven Nov. 21.

households across our area in the challenging weeks and months ahead.” The Supreme Council has contributed more than $1.5 million to food banks since Leave No Neighbor Behind launched in April 2020. Local councils have donated more than $700,000 and more than 330 tons of food. “As our nation faces tough economic times due to the pandemic, the Knights of Columbus remains steadfast in our commitment to helping the most vulnerable members of our society,” said Supreme Knight Carl Anderson. B

K of C Everyday Heroes Receives Emmy AN EPISODE from the

second season of the Knights of Columbus Everyday Heroes documentary series was recognized at the 62nd annual Chicago/Midwest Emmy Awards Nov. 22. “No Greater Love,” which told the story of Kendrick Castillo, received the award for “Outstanding Achievement for Magazine Programming — Segment.”

Kendrick was killed after heroically charging a shooter at his high school in Colorado to save his classmates in May 2019. He was posthumously named a Knight (his father, John, is also a member) and received the Caritas Award at the 137th Supreme Convention in Minneapolis. “No Greater Love” and all episodes of Everyday Heroes can be viewed online at kofc.org/heroes. B JANUARY 2021 B C O L U M B I A