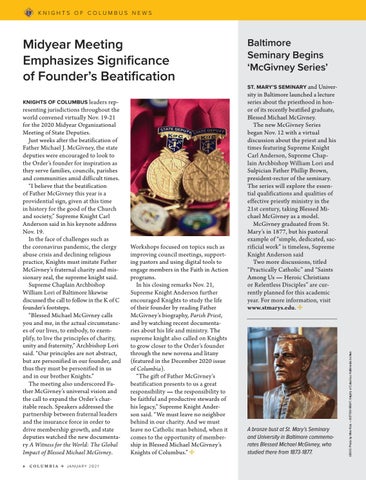 KNIGHTS OF COLUMBUS leaders representing jurisdictions throughout the world convened virtually Nov. 19-21 for the 2020 Midyear Organizational Meeting of State Deputies. Just weeks after the beatification of Father Michael J. McGivney, the state deputies were encouraged to look to the Order’s founder for inspiration as they serve families, councils, parishes and communities amid difficult times. “I believe that the beatification of Father McGivney this year is a providential sign, given at this time in history for the good of the Church and society,” Supreme Knight Carl Anderson said in his keynote address Nov. 19. In the face of challenges such as the coronavirus pandemic, the clergy abuse crisis and declining religious practice, Knights must imitate Father McGivney’s fraternal charity and missionary zeal, the supreme knight said. Supreme Chaplain Archbishop William Lori of Baltimore likewise discussed the call to follow in the K of C founder’s footsteps. “Blessed Michael McGivney calls you and me, in the actual circumstances of our lives, to embody, to exemplify, to live the principles of charity, unity and fraternity,” Archbishop Lori said. “Our principles are not abstract, but are personified in our founder, and thus they must be personified in us and in our brother Knights.” The meeting also underscored Father McGivney’s universal vision and the call to expand the Order’s charitable reach. Speakers addressed the partnership between fraternal leaders and the insurance force in order to drive membership growth, and state deputies watched the new documentary A Witness for the World: The Global Impact of Blessed Michael McGivney. 6

Workshops focused on topics such as improving council meetings, supporting pastors and using digital tools to engage members in the Faith in Action programs. In his closing remarks Nov. 21, Supreme Knight Anderson further encouraged Knights to study the life of their founder by reading Father McGivney’s biography, Parish Priest, and by watching recent documentaries about his life and ministry. The supreme knight also called on Knights to grow closer to the Order’s founder through the new novena and litany (featured in the December 2020 issue of Columbia). “The gift of Father McGivney’s beatification presents to us a great responsibility — the responsibility to be faithful and productive stewards of his legacy,” Supreme Knight Anderson said. “We must leave no neighbor behind in our charity. And we must leave no Catholic man behind, when it comes to the opportunity of membership in Blessed Michael McGivney’s Knights of Columbus.” B

Baltimore Seminary Begins ‘McGivney Series’ ST. MARY’S SEMINARY and University in Baltimore launched a lecture series about the priesthood in honor of its recently beatified graduate, Blessed Michael McGivney. The new McGivney Series began Nov. 12 with a virtual discussion about the priest and his times featuring Supreme Knight Carl Anderson, Supreme Chaplain Archbishop William Lori and Sulpician Father Phillip Brown, president-rector of the seminary. The series will explore the essential qualifications and qualities of effective priestly ministry in the 21st century, taking Blessed Michael McGivney as a model. McGivney graduated from St. Mary’s in 1877, but his pastoral example of “simple, dedicated, sacrificial work” is timeless, Supreme Knight Anderson said Two more discussions, titled “Practically Catholic” and “Saints Among Us — Heroic Christians or Relentless Disciples” are currently planned for this academic year. For more information, visit www.stmarys.edu. B

A bronze bust at St. Mary’s Seminary and University in Baltimore commemorates Blessed Michael McGivney, who studied there from 1873-1877.