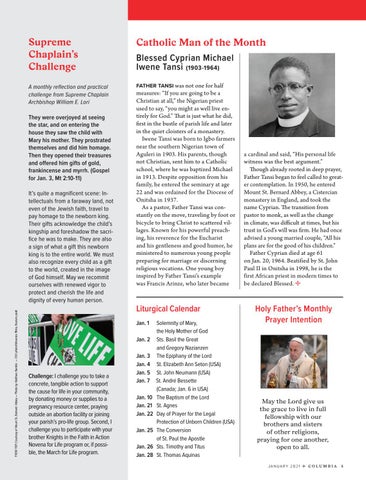 Catholic Man of the Month

FATHER TANSI was not one for half measures: “If you are going to be a Christian at all,” the Nigerian priest used to say, “you might as well live entirely for God.” That is just what he did, first in the bustle of parish life and later in the quiet cloisters of a monastery. Iwene Tansi was born to Igbo farmers near the southern Nigerian town of Aguleri in 1903. His parents, though not Christian, sent him to a Catholic school, where he was baptized Michael in 1913. Despite opposition from his family, he entered the seminary at age 22 and was ordained for the Diocese of Onitsha in 1937. As a pastor, Father Tansi was constantly on the move, traveling by foot or bicycle to bring Christ to scattered villages. Known for his powerful preaching, his reverence for the Eucharist and his gentleness and good humor, he ministered to numerous young people preparing for marriage or discerning religious vocations. One young boy inspired by Father Tansi’s example was Francis Arinze, who later became

They were overjoyed at seeing the star, and on entering the house they saw the child with Mary his mother. They prostrated themselves and did him homage. Then they opened their treasures and offered him gifts of gold, frankincense and myrrh. (Gospel for Jan. 3, Mt 2:10-11)

It’s quite a magnificent scene: Intellectuals from a faraway land, not even of the Jewish faith, travel to pay homage to the newborn king. Their gifts acknowledge the child’s kingship and foreshadow the sacrifice he was to make. They are also a sign of what a gift this newborn king is to the entire world. We must also recognize every child as a gift to the world, created in the image of God himself. May we recommit ourselves with renewed vigor to protect and cherish the life and dignity of every human person.

Challenge: I challenge you to take a concrete, tangible action to support the cause for life in your community, by donating money or supplies to a pregnancy resource center, praying outside an abortion facility or joining your parish’s pro-life group. Second, I challenge you to participate with your brother Knights in the Faith in Action Novena for Life program or, if possible, the March for Life program.

a cardinal and said, “His personal life witness was the best argument.” Though already rooted in deep prayer, Father Tansi began to feel called to greater contemplation. In 1950, he entered Mount St. Bernard Abbey, a Cistercian monastery in England, and took the name Cyprian. The transition from pastor to monk, as well as the change in climate, was difficult at times, but his trust in God’s will was firm. He had once advised a young married couple, “All his plans are for the good of his children.” Father Cyprian died at age 61 on Jan. 20, 1964. Beatified by St. John Paul II in Onitsha in 1998, he is the first African priest in modern times to be declared Blessed. B

May the Lord give us the grace to live in full fellowship with our brothers and sisters of other religions, praying for one another, open to all. JANUARY 2021 B C O L U M B I A