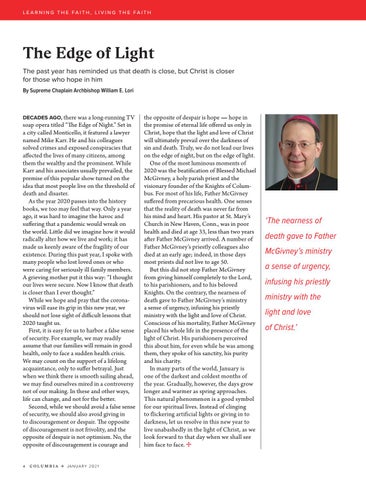 The Edge of Light The past year has reminded us that death is close, but Christ is closer for those who hope in him By Supreme Chaplain Archbishop William E. Lori

DECADES AGO, there was a long-running TV soap opera titled “The Edge of Night.” Set in a city called Monticello, it featured a lawyer named Mike Karr. He and his colleagues solved crimes and exposed conspiracies that affected the lives of many citizens, among them the wealthy and the prominent. While Karr and his associates usually prevailed, the premise of this popular show turned on the idea that most people live on the threshold of death and disaster. As the year 2020 passes into the history books, we too may feel that way. Only a year ago, it was hard to imagine the havoc and suffering that a pandemic would wreak on the world. Little did we imagine how it would radically alter how we live and work; it has made us keenly aware of the fragility of our existence. During this past year, I spoke with many people who lost loved ones or who were caring for seriously ill family members. A grieving mother put it this way: “I thought our lives were secure. Now I know that death is closer than I ever thought.” While we hope and pray that the coronavirus will ease its grip in this new year, we should not lose sight of difficult lessons that 2020 taught us. First, it is easy for us to harbor a false sense of security. For example, we may readily assume that our families will remain in good health, only to face a sudden health crisis. We may count on the support of a lifelong acquaintance, only to suffer betrayal. Just when we think there is smooth sailing ahead, we may find ourselves mired in a controversy not of our making. In these and other ways, life can change, and not for the better. Second, while we should avoid a false sense of security, we should also avoid giving in to discouragement or despair. The opposite of discouragement is not frivolity, and the opposite of despair is not optimism. No, the opposite of discouragement is courage and

the opposite of despair is hope — hope in the promise of eternal life offered us only in Christ, hope that the light and love of Christ will ultimately prevail over the darkness of sin and death. Truly, we do not lead our lives on the edge of night, but on the edge of light. One of the most luminous moments of 2020 was the beatification of Blessed Michael McGivney, a holy parish priest and the visionary founder of the Knights of Columbus. For most of his life, Father McGivney suffered from precarious health. One senses that the reality of death was never far from his mind and heart. His pastor at St. Mary’s Church in New Haven, Conn., was in poor health and died at age 33, less than two years after Father McGivney arrived. A number of Father McGivney’s priestly colleagues also died at an early age; indeed, in those days most priests did not live to age 50. But this did not stop Father McGivney from giving himself completely to the Lord, to his parishioners, and to his beloved Knights. On the contrary, the nearness of death gave to Father McGivney’s ministry a sense of urgency, infusing his priestly ministry with the light and love of Christ. Conscious of his mortality, Father McGivney placed his whole life in the presence of the light of Christ. His parishioners perceived this about him, for even while he was among them, they spoke of his sanctity, his purity and his charity. In many parts of the world, January is one of the darkest and coldest months of the year. Gradually, however, the days grow longer and warmer as spring approaches. This natural phenomenon is a good symbol for our spiritual lives. Instead of clinging to flickering artificial lights or giving in to darkness, let us resolve in this new year to live unabashedly in the light of Christ, as we look forward to that day when we shall see him face to face. B

‘The nearness of death gave to Father McGivney’s ministry a sense of urgency, infusing his priestly ministry with the light and love of Christ.’