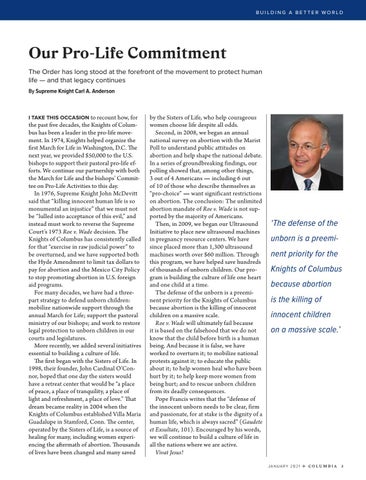 Our Pro-Life Commitment The Order has long stood at the forefront of the movement to protect human life — and that legacy continues By Supreme Knight Carl A. Anderson

I TAKE THIS OCCASION to recount how, for the past five decades, the Knights of Columbus has been a leader in the pro-life movement. In 1974, Knights helped organize the first March for Life in Washington, D.C. The next year, we provided $50,000 to the U.S. bishops to support their pastoral pro-life efforts. We continue our partnership with both the March for Life and the bishops’ Committee on Pro-Life Activities to this day. In 1976, Supreme Knight John McDevitt said that “killing innocent human life is so monumental an injustice” that we must not be “lulled into acceptance of this evil,” and instead must work to reverse the Supreme Court’s 1973 Roe v. Wade decision. The Knights of Columbus has consistently called for that “exercise in raw judicial power” to be overturned, and we have supported both the Hyde Amendment to limit tax dollars to pay for abortion and the Mexico City Policy to stop promoting abortion in U.S. foreign aid programs. For many decades, we have had a threepart strategy to defend unborn children: mobilize nationwide support through the annual March for Life; support the pastoral ministry of our bishops; and work to restore legal protection to unborn children in our courts and legislatures. More recently, we added several initiatives essential to building a culture of life. The first began with the Sisters of Life. In 1998, their founder, John Cardinal O’Connor, hoped that one day the sisters would have a retreat center that would be “a place of peace, a place of tranquility, a place of light and refreshment, a place of love.” That dream became reality in 2004 when the Knights of Columbus established Villa Maria Guadalupe in Stamford, Conn. The center, operated by the Sisters of Life, is a source of healing for many, including women experiencing the aftermath of abortion. Thousands of lives have been changed and many saved

by the Sisters of Life, who help courageous women choose life despite all odds. Second, in 2008, we began an annual national survey on abortion with the Marist Poll to understand public attitudes on abortion and help shape the national debate. In a series of groundbreaking findings, our polling showed that, among other things, 3 out of 4 Americans — including 6 out of 10 of those who describe themselves as “pro-choice” — want significant restrictions on abortion. The conclusion: The unlimited abortion mandate of Roe v. Wade is not supported by the majority of Americans. Then, in 2009, we began our Ultrasound Initiative to place new ultrasound machines in pregnancy resource centers. We have since placed more than 1,300 ultrasound machines worth over $60 million. Through this program, we have helped save hundreds of thousands of unborn children. Our program is building the culture of life one heart and one child at a time. The defense of the unborn is a preeminent priority for the Knights of Columbus because abortion is the killing of innocent children on a massive scale. Roe v. Wade will ultimately fail because it is based on the falsehood that we do not know that the child before birth is a human being. And because it is false, we have worked to overturn it; to mobilize national protests against it; to educate the public about it; to help women heal who have been hurt by it; to help keep more women from being hurt; and to rescue unborn children from its deadly consequences. Pope Francis writes that the “defense of the innocent unborn needs to be clear, firm and passionate, for at stake is the dignity of a human life, which is always sacred” (Gaudete et Exsultate, 101). Encouraged by his words, we will continue to build a culture of life in all the nations where we are active. Vivat Jesus!

‘The defense of the unborn is a preeminent priority for the Knights of Columbus because abortion is the killing of innocent children on a massive scale.’