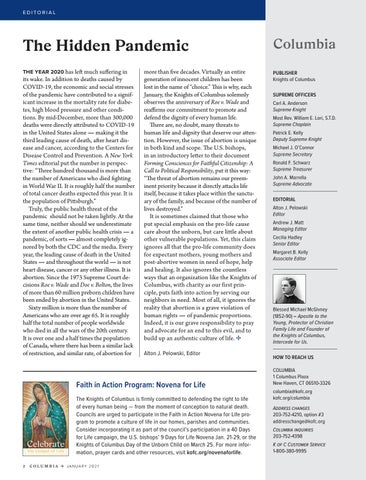 THE YEAR 2020 has left much suffering in

its wake. In addition to deaths caused by COVID-19, the economic and social stresses of the pandemic have contributed to a significant increase in the mortality rate for diabetes, high blood pressure and other conditions. By mid-December, more than 300,000 deaths were directly attributed to COVID-19 in the United States alone — making it the third leading cause of death, after heart disease and cancer, according to the Centers for Disease Control and Prevention. A New York Times editorial put the number in perspective: “Three hundred thousand is more than the number of Americans who died fighting in World War II. It is roughly half the number of total cancer deaths expected this year. It is the population of Pittsburgh.” Truly, the public health threat of the pandemic should not be taken lightly. At the same time, neither should we underestimate the extent of another public health crisis — a pandemic, of sorts — almost completely ignored by both the CDC and the media. Every year, the leading cause of death in the United States — and throughout the world — is not heart disease, cancer or any other illness. It is abortion. Since the 1973 Supreme Court decisions Roe v. Wade and Doe v. Bolton, the lives of more than 60 million preborn children have been ended by abortion in the United States. Sixty million is more than the number of Americans who are over age 65. It is roughly half the total number of people worldwide who died in all the wars of the 20th century. It is over one and a half times the population of Canada, where there has been a similar lack of restriction, and similar rate, of abortion for

more than five decades. Virtually an entire generation of innocent children has been lost in the name of “choice.” This is why, each January, the Knights of Columbus solemnly observes the anniversary of Roe v. Wade and reaffirms our commitment to promote and defend the dignity of every human life. There are, no doubt, many threats to human life and dignity that deserve our attention. However, the issue of abortion is unique in both kind and scope. The U.S. bishops, in an introductory letter to their document Forming Consciences for Faithful Citizenship: A Call to Political Responsibility, put it this way: “The threat of abortion remains our preeminent priority because it directly attacks life itself, because it takes place within the sanctuary of the family, and because of the number of lives destroyed.” It is sometimes claimed that those who put special emphasis on the pro-life cause care about the unborn, but care little about other vulnerable populations. Yet, this claim ignores all that the pro-life community does for expectant mothers, young mothers and post-abortive women in need of hope, help and healing. It also ignores the countless ways that an organization like the Knights of Columbus, with charity as our first principle, puts faith into action by serving our neighbors in need. Most of all, it ignores the reality that abortion is a grave violation of human rights — of pandemic proportions. Indeed, it is our grave responsibility to pray and advocate for an end to this evil, and to build up an authentic culture of life. B Alton J. Pelowski, Editor

Faith in Action Program: Novena for Life The Knights of Columbus is firmly committed to defending the right to life of every human being — from the moment of conception to natural death. Councils are urged to participate in the Faith in Action Novena for Life program to promote a culture of life in our homes, parishes and communities. Consider incorporating it as part of the council’s participation in a 40 Days for Life campaign, the U.S. bishops’ 9 Days for Life Novena Jan. 21-29, or the Knights of Columbus Day of the Unborn Child on March 25. For more information, prayer cards and other resources, visit kofc.org/novenaforlife. 2