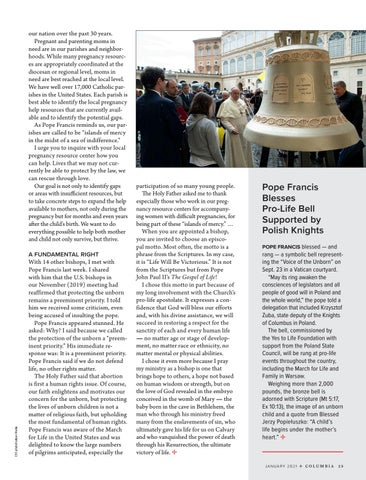 our nation over the past 30 years. Pregnant and parenting moms in need are in our parishes and neighborhoods. While many pregnancy resources are appropriately coordinated at the diocesan or regional level, moms in need are best reached at the local level. We have well over 17,000 Catholic parishes in the United States. Each parish is best able to identify the local pregnancy help resources that are currently available and to identify the potential gaps. As Pope Francis reminds us, our parishes are called to be “islands of mercy in the midst of a sea of indifference.” I urge you to inquire with your local pregnancy resource center how you can help. Lives that we may not currently be able to protect by the law, we can rescue through love. Our goal is not only to identify gaps or areas with insufficient resources, but to take concrete steps to expand the help available to mothers, not only during the pregnancy but for months and even years after the child’s birth. We want to do everything possible to help both mother and child not only survive, but thrive.

With 14 other bishops, I met with Pope Francis last week. I shared with him that the U.S. bishops in our November (2019) meeting had reaffirmed that protecting the unborn remains a preeminent priority. I told him we received some criticism, even being accused of insulting the pope. Pope Francis appeared stunned. He asked: Why? I said because we called the protection of the unborn a “preeminent priority.” His immediate response was: It is a preeminent priority. Pope Francis said if we do not defend life, no other rights matter. The Holy Father said that abortion is first a human rights issue. Of course, our faith enlightens and motivates our concern for the unborn, but protecting the lives of unborn children is not a matter of religious faith, but upholding the most fundamental of human rights. Pope Francis was aware of the March for Life in the United States and was delighted to know the large numbers of pilgrims anticipated, especially the

participation of so many young people. The Holy Father asked me to thank especially those who work in our pregnancy resource centers for accompanying women with difficult pregnancies, for being part of these “islands of mercy.” … When you are appointed a bishop, you are invited to choose an episcopal motto. Most often, the motto is a phrase from the Scriptures. In my case, it is “Life Will Be Victorious.” It is not from the Scriptures but from Pope John Paul II’s The Gospel of Life! I chose this motto in part because of my long involvement with the Church’s pro-life apostolate. It expresses a confidence that God will bless our efforts and, with his divine assistance, we will succeed in restoring a respect for the sanctity of each and every human life — no matter age or stage of development, no matter race or ethnicity, no matter mental or physical abilities. I chose it even more because I pray my ministry as a bishop is one that brings hope to others, a hope not based on human wisdom or strength, but on the love of God revealed in the embryo conceived in the womb of Mary — the baby born in the cave in Bethlehem, the man who through his ministry freed many from the enslavements of sin, who ultimately gave his life for us on Calvary and who vanquished the power of death through his Resurrection, the ultimate victory of life. B

Pope Francis Blesses Pro-Life Bell Supported by Polish Knights POPE FRANCIS blessed — and rang — a symbolic bell representing the “Voice of the Unborn” on Sept. 23 in a Vatican courtyard. “May its ring awaken the consciences of legislators and all people of good will in Poland and the whole world,” the pope told a delegation that included Krzysztof Zuba, state deputy of the Knights of Columbus in Poland. The bell, commissioned by the Yes to Life Foundation with support from the Poland State Council, will be rung at pro-life events throughout the country, including the March for Life and Family in Warsaw. Weighing more than 2,000 pounds, the bronze bell is adorned with Scripture (Mt 5:17, Ex 10:13), the image of an unborn child and a quote from Blessed Jerzy Popiełuszko: “A child’s life begins under the mother’s heart.” B