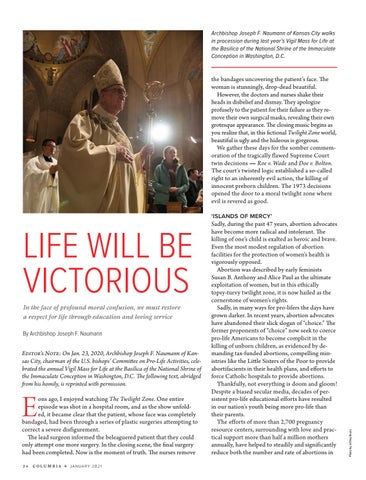 Archbishop Joseph F. Naumann of Kansas City walks in procession during last year’s Vigil Mass for Life at the Basilica of the National Shrine of the Immaculate Conception in Washington, D.C.

the bandages uncovering the patient’s face. The woman is stunningly, drop-dead beautiful. However, the doctors and nurses shake their heads in disbelief and dismay. They apologize profusely to the patient for their failure as they remove their own surgical masks, revealing their own grotesque appearance. The closing music begins as you realize that, in this fictional Twilight Zone world, beautiful is ugly and the hideous is gorgeous. We gather these days for the somber commemoration of the tragically flawed Supreme Court twin decisions — Roe v. Wade and Doe v. Bolton. The court’s twisted logic established a so-called right to an inherently evil action, the killing of innocent preborn children. The 1973 decisions opened the door to a moral twilight zone where evil is revered as good.

In the face of profound moral confusion, we must restore a respect for life through education and loving service By Archbishop Joseph F. Naumann

Editor’s Note: On Jan. 23, 2020, Archbishop Joseph F. Naumann of Kansas City, chairman of the U.S. bishops’ Committee on Pro-Life Activities, celebrated the annual Vigil Mass for Life at the Basilica of the National Shrine of the Immaculate Conception in Washington, D.C. The following text, abridged from his homily, is reprinted with permission.

ons ago, I enjoyed watching The Twilight Zone. One entire episode was shot in a hospital room, and as the show unfolded, it became clear that the patient, whose face was completely bandaged, had been through a series of plastic surgeries attempting to correct a severe disfigurement. The lead surgeon informed the beleaguered patient that they could only attempt one more surgery. In the closing scene, the final surgery had been completed. Now is the moment of truth. The nurses remove 24

Sadly, during the past 47 years, abortion advocates have become more radical and intolerant. The killing of one’s child is exalted as heroic and brave. Even the most modest regulation of abortion facilities for the protection of women’s health is vigorously opposed. Abortion was described by early feminists Susan B. Anthony and Alice Paul as the ultimate exploitation of women, but in this ethically topsy-turvy twilight zone, it is now hailed as the cornerstone of women’s rights. Sadly, in many ways for pro-lifers the days have grown darker. In recent years, abortion advocates have abandoned their slick slogan of “choice.” The former proponents of “choice” now seek to coerce pro-life Americans to become complicit in the killing of unborn children, as evidenced by demanding tax-funded abortions, compelling ministries like the Little Sisters of the Poor to provide abortifacients in their health plans, and efforts to force Catholic hospitals to provide abortions. Thankfully, not everything is doom and gloom! Despite a biased secular media, decades of persistent pro-life educational efforts have resulted in our nation’s youth being more pro-life than their parents. The efforts of more than 2,700 pregnancy resource centers, surrounding with love and practical support more than half a million mothers annually, have helped to steadily and significantly reduce both the number and rate of abortions in

LIFE WILL BE VICTORIOUS