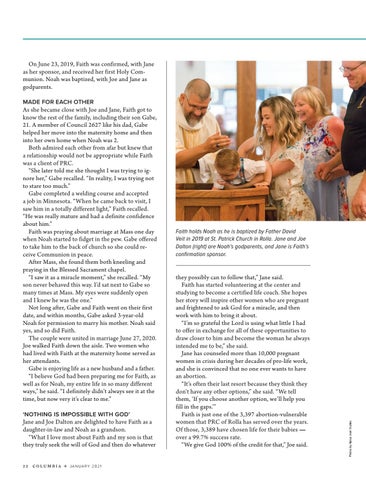 On June 23, 2019, Faith was confirmed, with Jane as her sponsor, and received her first Holy Communion. Noah was baptized, with Joe and Jane as godparents. MADE FOR EACH OTHER

‘NOTHING IS IMPOSSIBLE WITH GOD’

Jane and Joe Dalton are delighted to have Faith as a daughter-in-law and Noah as a grandson. “What I love most about Faith and my son is that they truly seek the will of God and then do whatever 22

Faith holds Noah as he is baptized by Father David Veit in 2019 at St. Patrick Church in Rolla. Jane and Joe Dalton (right) are Noah’s godparents, and Jane is Faith’s confirmation sponsor.

they possibly can to follow that,” Jane said. Faith has started volunteering at the center and studying to become a certified life coach. She hopes her story will inspire other women who are pregnant and frightened to ask God for a miracle, and then work with him to bring it about. “I’m so grateful the Lord is using what little I had to offer in exchange for all of these opportunities to draw closer to him and become the woman he always intended me to be,” she said. Jane has counseled more than 10,000 pregnant women in crisis during her decades of pro-life work, and she is convinced that no one ever wants to have an abortion. “It’s often their last resort because they think they don’t have any other options,” she said. “We tell them, ‘If you choose another option, we’ll help you fill in the gaps.’” Faith is just one of the 3,397 abortion-vulnerable women that PRC of Rolla has served over the years. Of those, 3,389 have chosen life for their babies — over a 99.7% success rate. “We give God 100% of the credit for that,” Joe said.

As she became close with Joe and Jane, Faith got to know the rest of the family, including their son Gabe, 21. A member of Council 2627 like his dad, Gabe helped her move into the maternity home and then into her own home when Noah was 2. Both admired each other from afar but knew that a relationship would not be appropriate while Faith was a client of PRC. “She later told me she thought I was trying to ignore her,” Gabe recalled. “In reality, I was trying not to stare too much.” Gabe completed a welding course and accepted a job in Minnesota. “When he came back to visit, I saw him in a totally different light,” Faith recalled. “He was really mature and had a definite confidence about him.” Faith was praying about marriage at Mass one day when Noah started to fidget in the pew. Gabe offered to take him to the back of church so she could receive Communion in peace. After Mass, she found them both kneeling and praying in the Blessed Sacrament chapel. “I saw it as a miracle moment,” she recalled. “My son never behaved this way. I’d sat next to Gabe so many times at Mass. My eyes were suddenly open and I knew he was the one.” Not long after, Gabe and Faith went on their first date, and within months, Gabe asked 3-year-old Noah for permission to marry his mother. Noah said yes, and so did Faith. The couple were united in marriage June 27, 2020. Joe walked Faith down the aisle. Two women who had lived with Faith at the maternity home served as her attendants. Gabe is enjoying life as a new husband and a father. “I believe God had been preparing me for Faith, as well as for Noah, my entire life in so many different ways,” he said. “I definitely didn’t always see it at the time, but now very it’s clear to me.”