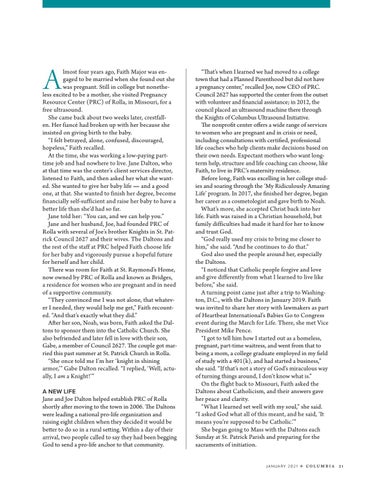 lmost four years ago, Faith Major was engaged to be married when she found out she was pregnant. Still in college but nonetheless excited to be a mother, she visited Pregnancy Resource Center (PRC) of Rolla, in Missouri, for a free ultrasound. She came back about two weeks later, crestfallen. Her fiancé had broken up with her because she insisted on giving birth to the baby. “I felt betrayed, alone, confused, discouraged, hopeless,” Faith recalled. At the time, she was working a low-paying parttime job and had nowhere to live. Jane Dalton, who at that time was the center’s client services director, listened to Faith, and then asked her what she wanted. She wanted to give her baby life — and a good one, at that. She wanted to finish her degree, become financially self-sufficient and raise her baby to have a better life than she’d had so far. Jane told her: “You can, and we can help you.” Jane and her husband, Joe, had founded PRC of Rolla with several of Joe’s brother Knights in St. Patrick Council 2627 and their wives. The Daltons and the rest of the staff at PRC helped Faith choose life for her baby and vigorously pursue a hopeful future for herself and her child. There was room for Faith at St. Raymond’s Home, now owned by PRC of Rolla and known as Bridges, a residence for women who are pregnant and in need of a supportive community. “They convinced me I was not alone, that whatever I needed, they would help me get,” Faith recounted. “And that’s exactly what they did.” After her son, Noah, was born, Faith asked the Daltons to sponsor them into the Catholic Church. She also befriended and later fell in love with their son, Gabe, a member of Council 2627. The couple got married this past summer at St. Patrick Church in Rolla. “She once told me I’m her ‘knight in shining armor,’” Gabe Dalton recalled. “I replied, ‘Well, actually, I am a Knight!’” A NEW LIFE

Jane and Joe Dalton helped establish PRC of Rolla shortly after moving to the town in 2006. The Daltons were leading a national pro-life organization and raising eight children when they decided it would be better to do so in a rural setting. Within a day of their arrival, two people called to say they had been begging God to send a pro-life anchor to that community.

“That’s when I learned we had moved to a college town that had a Planned Parenthood but did not have a pregnancy center,” recalled Joe, now CEO of PRC. Council 2627 has supported the center from the outset with volunteer and financial assistance; in 2012, the council placed an ultrasound machine there through the Knights of Columbus Ultrasound Initiative. The nonprofit center offers a wide range of services to women who are pregnant and in crisis or need, including consultations with certified, professional life coaches who help clients make decisions based on their own needs. Expectant mothers who want longterm help, structure and life coaching can choose, like Faith, to live in PRC’s maternity residence. Before long, Faith was excelling in her college studies and soaring through the ‘My Ridiculously Amazing Life’ program. In 2017, she finished her degree, began her career as a cosmetologist and gave birth to Noah. What’s more, she accepted Christ back into her life. Faith was raised in a Christian household, but family difficulties had made it hard for her to know and trust God. “God really used my crisis to bring me closer to him,” she said. “And he continues to do that.” God also used the people around her, especially the Daltons. “I noticed that Catholic people forgive and love and give differently from what I learned to live like before,” she said. A turning point came just after a trip to Washington, D.C., with the Daltons in January 2019. Faith was invited to share her story with lawmakers as part of Heartbeat International’s Babies Go to Congress event during the March for Life. There, she met Vice President Mike Pence. “I got to tell him how I started out as a homeless, pregnant, part-time waitress, and went from that to being a mom, a college graduate employed in my field of study with a 401(k), and had started a business,” she said. “If that’s not a story of God’s miraculous way of turning things around, I don’t know what is.” On the flight back to Missouri, Faith asked the Daltons about Catholicism, and their answers gave her peace and clarity. “What I learned set well with my soul,” she said. “I asked God what all of this meant, and he said, ‘It means you’re supposed to be Catholic.’” She began going to Mass with the Daltons each Sunday at St. Patrick Parish and preparing for the sacraments of initiation. JANUARY 2021 B C O L U M B I A