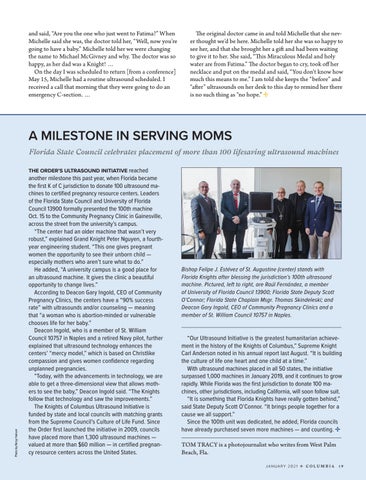 and said, “Are you the one who just went to Fatima?” When Michelle said she was, the doctor told her, “Well, now you’re going to have a baby.” Michelle told her we were changing the name to Michael McGivney and why. The doctor was so happy, as her dad was a Knight! … On the day I was scheduled to return [from a conference] May 15, Michelle had a routine ultrasound scheduled. I received a call that morning that they were going to do an emergency C-section. …

The original doctor came in and told Michelle that she never thought we’d be here. Michelle told her she was so happy to see her, and that she brought her a gift and had been waiting to give it to her. She said, “This Miraculous Medal and holy water are from Fatima.” The doctor began to cry, took off her necklace and put on the medal and said, “You don’t know how much this means to me.” I am told she keeps the “before” and “after” ultrasounds on her desk to this day to remind her there is no such thing as “no hope.” B

another milestone this past year, when Florida became the first K of C jurisdiction to donate 100 ultrasound machines to certified pregnancy resource centers. Leaders of the Florida State Council and University of Florida Council 13900 formally presented the 100th machine Oct. 15 to the Community Pregnancy Clinic in Gainesville, across the street from the university’s campus. “The center had an older machine that wasn’t very robust,” explained Grand Knight Peter Nguyen, a fourthyear engineering student. “This one gives pregnant women the opportunity to see their unborn child — especially mothers who aren’t sure what to do.” He added, “A university campus is a good place for an ultrasound machine. It gives the clinic a beautiful opportunity to change lives.” According to Deacon Gary Ingold, CEO of Community Pregnancy Clinics, the centers have a “90% success rate” with ultrasounds and/or counseling — meaning that “a woman who is abortion-minded or vulnerable chooses life for her baby.” Deacon Ingold, who is a member of St. William Council 10757 in Naples and a retired Navy pilot, further explained that ultrasound technology enhances the centers’ “mercy model,” which is based on Christlike compassion and gives women confidence regarding unplanned pregnancies. “Today, with the advancements in technology, we are able to get a three-dimensional view that allows mothers to see the baby,” Deacon Ingold said. “The Knights follow that technology and saw the improvements.” The Knights of Columbus Ultrasound Initiative is funded by state and local councils with matching grants from the Supreme Council’s Culture of Life Fund. Since the Order first launched the initiative in 2009, councils have placed more than 1,300 ultrasound machines — valued at more than $60 million — in certified pregnancy resource centers across the United States.

“Our Ultrasound Initiative is the greatest humanitarian achievement in the history of the Knights of Columbus,” Supreme Knight Carl Anderson noted in his annual report last August. “It is building the culture of life one heart and one child at a time.” With ultrasound machines placed in all 50 states, the initiative surpassed 1,000 machines in January 2019, and it continues to grow rapidly. While Florida was the first jurisdiction to donate 100 machines, other jurisdictions, including California, will soon follow suit. “It is something that Florida Knights have really gotten behind,” said State Deputy Scott O’Connor. “It brings people together for a cause we all support.” Since the 100th unit was dedicated, he added, Florida councils have already purchased seven more machines — and counting. B

TOM TRACY is a photojournalist who writes from West Palm Beach, Fla. JANUARY 2021 B C O L U M B I A