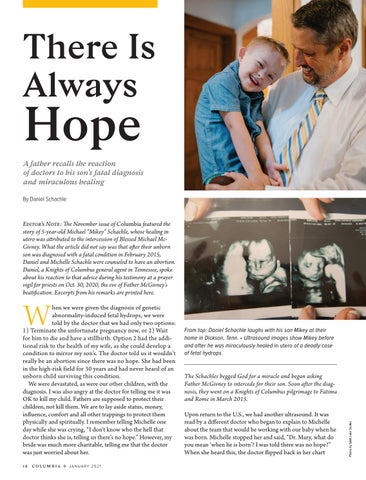 Editor’s Note: The November issue of Columbia featured the story of 5-year-old Michael “Mikey” Schachle, whose healing in utero was attributed to the intercession of Blessed Michael McGivney. What the article did not say was that after their unborn son was diagnosed with a fatal condition in February 2015, Daniel and Michelle Schachle were counseled to have an abortion. Daniel, a Knights of Columbus general agent in Tennessee, spoke about his reaction to that advice during his testimony at a prayer vigil for priests on Oct. 30, 2020, the eve of Father McGivney’s beatification. Excerpts from his remarks are printed here.

From top: Daniel Schachle laughs with his son Mikey at their home in Dickson, Tenn. • Ultrasound images show Mikey before and after he was miraculously healed in utero of a deadly case of fetal hydrops.

The Schachles begged God for a miracle and began asking Father McGivney to intercede for their son. Soon after the diagnosis, they went on a Knights of Columbus pilgrimage to Fatima and Rome in March 2015. Upon return to the U.S., we had another ultrasound. It was read by a different doctor who began to explain to Michelle about the team that would be working with our baby when he was born. Michelle stopped her and said, “Dr. Mary, what do you mean ‘when he is born’? I was told there was no hope?” When she heard this, the doctor flipped back in her chart

hen we were given the diagnosis of genetic abnormality-induced fetal hydrops, we were told by the doctor that we had only two options: 1) Terminate the unfortunate pregnancy now, or 2) Wait for him to die and have a stillbirth. Option 2 had the additional risk to the health of my wife, as she could develop a condition to mirror my son’s. The doctor told us it wouldn’t really be an abortion since there was no hope. She had been in the high-risk field for 30 years and had never heard of an unborn child surviving this condition. We were devastated, as were our other children, with the diagnosis. I was also angry at the doctor for telling me it was OK to kill my child. Fathers are supposed to protect their children, not kill them. We are to lay aside status, money, influence, comfort and all other trappings to protect them physically and spiritually. I remember telling Michelle one day while she was crying, “I don’t know who the hell that doctor thinks she is, telling us there’s no hope.” However, my bride was much more charitable, telling me that the doctor was just worried about her. C O L U M B I A B JANUARY 2021