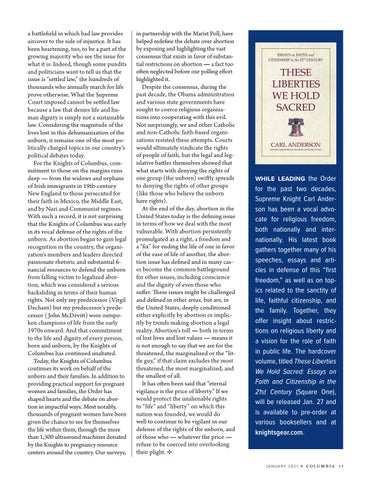 a battlefield in which bad law provides aircover to the side of injustice. It has been heartening, too, to be a part of the growing majority who see the issue for what it is. Indeed, though some pundits and politicians want to tell us that the issue is “settled law,” the hundreds of thousands who annually march for life prove otherwise. What the Supreme Court imposed cannot be settled law because a law that denies life and human dignity is simply not a sustainable law. Considering the magnitude of the lives lost in this dehumanization of the unborn, it remains one of the most politically charged topics in our country’s political debates today. For the Knights of Columbus, commitment to those on the margins runs deep — from the widows and orphans of Irish immigrants in 19th-century New England to those persecuted for their faith in Mexico, the Middle East, and by Nazi and Communist regimes. With such a record, it is not surprising that the Knights of Columbus was early in its vocal defense of the rights of the unborn. As abortion began to gain legal recognition in the country, the organization’s members and leaders directed passionate rhetoric and substantial financial resources to defend the unborn from falling victim to legalized abortion, which was considered a serious backsliding in terms of their human rights. Not only my predecessor (Virgil Dechant) but my predecessor’s predecessor ( John McDevitt) were outspoken champions of life from the early 1970s onward. And that commitment to the life and dignity of every person, born and unborn, by the Knights of Columbus has continued unabated. Today, the Knights of Columbus continues its work on behalf of the unborn and their families. In addition to providing practical support for pregnant women and families, the Order has shaped hearts and the debate on abortion in impactful ways. Most notably, thousands of pregnant women have been given the chance to see for themselves the life within them, through the more than 1,300 ultrasound machines donated by the Knights to pregnancy resource centers around the country. Our surveys,

in partnership with the Marist Poll, have helped redefine the debate over abortion by exposing and highlighting the vast consensus that exists in favor of substantial restrictions on abortion — a fact too often neglected before our polling effort highlighted it. Despite the consensus, during the past decade, the Obama administration and various state governments have sought to coerce religious organizations into cooperating with this evil. Not surprisingly, we and other Catholic and non-Catholic faith-based organizations resisted these attempts. Courts would ultimately vindicate the rights of people of faith, but the legal and legislative battles themselves showed that what starts with denying the rights of one group (the unborn) swiftly spreads to denying the rights of other groups (like those who believe the unborn have rights). At the end of the day, abortion in the United States today is the defining issue in terms of how we deal with the most vulnerable. With abortion persistently promulgated as a right, a freedom and a “fix” for ending the life of one in favor of the ease of life of another, the abortion issue has defined and in many cases become the common battleground for other issues, including conscience and the dignity of even those who suffer. These issues might be challenged and defined in other areas, but are, in the United States, deeply conditioned either explicitly by abortion or implicitly by trends making abortion a legal reality. Abortion’s toll — both in terms of lost lives and lost values — means it is not enough to say that we are for the threatened, the marginalized or the “little guy,” if that claim excludes the most threatened, the most marginalized, and the smallest of all. It has often been said that “eternal vigilance is the price of liberty.” If we would protect the unalienable rights to “life” and “liberty” on which this nation was founded, we would do well to continue to be vigilant in our defense of the rights of the unborn, and of those who — whatever the price — refuse to be coerced into overlooking their plight. B

WHILE LEADING the Order

for the past two decades, Supreme Knight Carl Anderson has been a vocal advocate for religious freedom, both nationally and internationally. His latest book gathers together many of his speeches, essays and articles in defense of this “first freedom,” as well as on topics related to the sanctity of life, faithful citizenship, and the family. Together, they offer insight about restrictions on religious liberty and a vision for the role of faith in public life. The hardcover volume, titled These Liberties We Hold Sacred: Essays on Faith and Citizenship in the 21st Century (Square One), will be released Jan. 27 and is available to pre-order at various booksellers and at knightsgear.com.