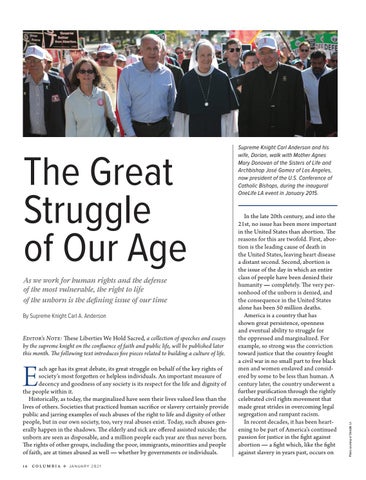 As we work for human rights and the defense of the most vulnerable, the right to life of the unborn is the defining issue of our time By Supreme Knight Carl A. Anderson

Editor’s Note: These Liberties We Hold Sacred, a collection of speeches and essays by the supreme knight on the confluence of faith and public life, will be published later this month. The following text introduces five pieces related to building a culture of life.

ach age has its great debate, its great struggle on behalf of the key rights of society’s most forgotten or helpless individuals. An important measure of decency and goodness of any society is its respect for the life and dignity of the people within it. Historically, as today, the marginalized have seen their lives valued less than the lives of others. Societies that practiced human sacrifice or slavery certainly provide public and jarring examples of such abuses of the right to life and dignity of other people, but in our own society, too, very real abuses exist. Today, such abuses generally happen in the shadows. The elderly and sick are offered assisted suicide; the unborn are seen as disposable, and a million people each year are thus never born. The rights of other groups, including the poor, immigrants, minorities and people of faith, are at times abused as well — whether by governments or individuals. 16

In the late 20th century, and into the 21st, no issue has been more important in the United States than abortion. The reasons for this are twofold. First, abortion is the leading cause of death in the United States, leaving heart disease a distant second. Second, abortion is the issue of the day in which an entire class of people have been denied their humanity — completely. The very personhood of the unborn is denied, and the consequence in the United States alone has been 50 million deaths. America is a country that has shown great persistence, openness and eventual ability to struggle for the oppressed and marginalized. For example, so strong was the conviction toward justice that the country fought a civil war in no small part to free black men and women enslaved and considered by some to be less than human. A century later, the country underwent a further purification through the rightly celebrated civil rights movement that made great strides in overcoming legal segregation and rampant racism. In recent decades, it has been heartening to be part of America’s continued passion for justice in the fight against abortion — a fight which, like the fight against slavery in years past, occurs on

The Great Struggle of Our Age

Supreme Knight Carl Anderson and his wife, Dorian, walk with Mother Agnes Mary Donovan of the Sisters of Life and Archbishop José Gomez of Los Angeles, now president of the U.S. Conference of Catholic Bishops, during the inaugural OneLife LA event in January 2015.