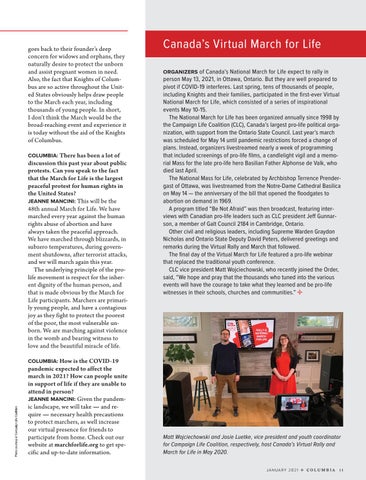 goes back to their founder’s deep concern for widows and orphans, they naturally desire to protect the unborn and assist pregnant women in need. Also, the fact that Knights of Columbus are so active throughout the United States obviously helps draw people to the March each year, including thousands of young people. In short, I don’t think the March would be the broad-reaching event and experience it is today without the aid of the Knights of Columbus.

COLUMBIA: There has been a lot of discussion this past year about public protests. Can you speak to the fact that the March for Life is the largest peaceful protest for human rights in the United States? JEANNE MANCINI: This will be the 48th annual March for Life. We have marched every year against the human rights abuse of abortion and have always taken the peaceful approach. We have marched through blizzards, in subzero temperatures, during government shutdowns, after terrorist attacks, and we will march again this year. The underlying principle of the prolife movement is respect for the inherent dignity of the human person, and that is made obvious by the March for Life participants. Marchers are primarily young people, and have a contagious joy as they fight to protect the poorest of the poor, the most vulnerable unborn. We are marching against violence in the womb and bearing witness to love and the beautiful miracle of life. COLUMBIA: How is the COVID-19 pandemic expected to affect the march in 2021? How can people unite in support of life if they are unable to attend in person? JEANNE MANCINI: Given the pandemic landscape, we will take — and require — necessary health precautions to protect marchers, as well increase our virtual presence for friends to participate from home. Check out our website at marchforlife.org to get specific and up-to-date information.

person May 13, 2021, in Ottawa, Ontario. But they are well prepared to pivot if COVID-19 interferes. Last spring, tens of thousands of people, including Knights and their families, participated in the first-ever Virtual National March for Life, which consisted of a series of inspirational events May 10-15. The National March for Life has been organized annually since 1998 by the Campaign Life Coalition (CLC), Canada’s largest pro-life political organization, with support from the Ontario State Council. Last year’s march was scheduled for May 14 until pandemic restrictions forced a change of plans. Instead, organizers livestreamed nearly a week of programming that included screenings of pro-life films, a candlelight vigil and a memorial Mass for the late pro-life hero Basilian Father Alphonse de Valk, who died last April. The National Mass for Life, celebrated by Archbishop Terrence Prendergast of Ottawa, was livestreamed from the Notre-Dame Cathedral Basilica on May 14 — the anniversary of the bill that opened the floodgates to abortion on demand in 1969. A program titled “Be Not Afraid” was then broadcast, featuring interviews with Canadian pro-life leaders such as CLC president Jeff Gunnarson, a member of Galt Council 2184 in Cambridge, Ontario. Other civil and religious leaders, including Supreme Warden Graydon Nicholas and Ontario State Deputy David Peters, delivered greetings and remarks during the Virtual Rally and March that followed. The final day of the Virtual March for Life featured a pro-life webinar that replaced the traditional youth conference. CLC vice president Matt Wojciechowski, who recently joined the Order, said, “We hope and pray that the thousands who tuned into the various events will have the courage to take what they learned and be pro-life witnesses in their schools, churches and communities.” B

Matt Wojciechowski and Josie Luetke, vice president and youth coordinator for Campaign Life Coalition, respectively, host Canada’s Virtual Rally and March for Life in May 2020. JANUARY 2021 B C O L U M B I A