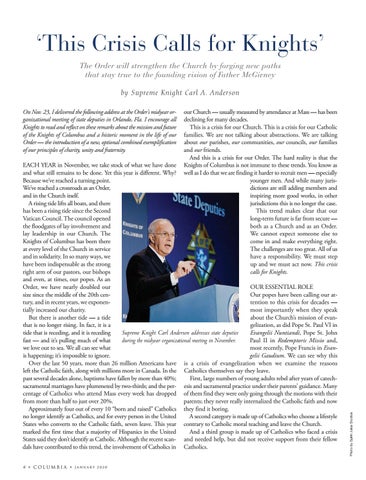 â&#x20AC;&#x2DC;This Crisis Calls for Knightsâ&#x20AC;&#x2122; The Order will strengthen the Church by forging new paths that stay true to the founding vision of Father McGivney by Supreme Knight Carl A. Anderson our Church â&#x20AC;&#x201D; usually measured by attendance at Mass â&#x20AC;&#x201D; has been declining for many decades. This is a crisis for our Church. This is a crisis for our Catholic families. We are not talking about abstractions. We are talking about our parishes, our communities, our councils, our families and our friends. And this is a crisis for our Order. The hard reality is that the Knights of Columbus is not immune to these trends. You know as well as I do that we are finding it harder to recruit men â&#x20AC;&#x201D; especially younger men. And while many jurisdictions are still adding members and inspiring more good works, in other jurisdictions this is no longer the case. This trend makes clear that our long-term future is far from secure â&#x20AC;&#x201D; both as a Church and as an Order. We cannot expect someone else to come in and make everything right. The challenges are too great. All of us have a responsibility. We must step up and we must act now. This crisis calls for Knights.

EACH YEAR in November, we take stock of what we have done and what still remains to be done. Yet this year is different. Why? Because weâ&#x20AC;&#x2122;ve reached a turning point. Weâ&#x20AC;&#x2122;ve reached a crossroads as an Order, and in the Church itself. A rising tide lifts all boats, and there has been a rising tide since the Second Vatican Council. The council opened the floodgates of lay involvement and lay leadership in our Church. The Knights of Columbus has been there at every level of the Church in service and in solidarity. In so many ways, we have been indispensable as the strong right arm of our pastors, our bishops and even, at times, our popes. As an Order, we have nearly doubled our OUR ESSENTIAL ROLE size since the middle of the 20th cenOur popes have been calling our attury, and in recent years, we exponentention to this crisis for decades â&#x20AC;&#x201D; tially increased our charity. most importantly when they speak But there is another tide â&#x20AC;&#x201D; a tide about the Churchâ&#x20AC;&#x2122;s mission of evanthat is no longer rising. In fact, it is a gelization, as did Pope St. Paul VI in tide that is receding, and it is receding Evangelii Nuntiandi, Pope St. John Supreme Knight Carl Anderson addresses state deputies fast â&#x20AC;&#x201D; and itâ&#x20AC;&#x2122;s pulling much of what Paul II in Redemptoris Missio and, during the midyear organizational meeting in November. we love out to sea. We all can see what most recently, Pope Francis in Evanis happening; itâ&#x20AC;&#x2122;s impossible to ignore. gelii Gaudium. We can see why this Over the last 50 years, more than 26 million Americans have is a crisis of evangelization when we examine the reasons left the Catholic faith, along with millions more in Canada. In the Catholics themselves say they leave. First, large numbers of young adults rebel after years of catechpast several decades alone, baptisms have fallen by more than 40%; sacramental marriages have plummeted by two-thirds; and the per- esis and sacramental practice under their parentsâ&#x20AC;&#x2122; guidance. Many centage of Catholics who attend Mass every week has dropped of them find they were only going through the motions with their parents; they never really internalized the Catholic faith and now from more than half to just over 20%. Approximately four out of every 10 â&#x20AC;&#x153;born and raisedâ&#x20AC;? Catholics they find it boring. A second category is made up of Catholics who choose a lifestyle no longer identify as Catholics, and for every person in the United States who converts to the Catholic faith, seven leave. This year contrary to Catholic moral teaching and leave the Church. And a third group is made up of Catholics who faced a crisis marked the first time that a majority of Hispanics in the United States said they donâ&#x20AC;&#x2122;t identify as Catholic. Although the recent scan- and needed help, but did not receive support from their fellow dals have contributed to this trend, the involvement of Catholics in Catholics. 6 â&#x2122;Ś COLUMBIA â&#x2122;Ś

On Nov. 23, I delivered the following address at the Orderâ&#x20AC;&#x2122;s midyear organizational meeting of state deputies in Orlando, Fla. I encourage all Knights to read and reflect on these remarks about the mission and future of the Knights of Columbus and a historic moment in the life of our Order â&#x20AC;&#x201D; the introduction of a new, optional combined exemplification of our principles of charity, unity and fraternity.