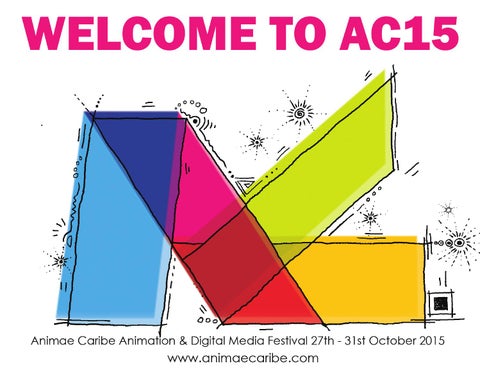 AWARD FOR MOST OUTSTANDING FILM

Dance Of The Daring -

Lisa Harding of the Caribbean

Development Bank, which sponsored the AC Animated Bootcamp, said she was blown away with the pitches.

“It speaks to the talent we have in the Region,”

she said. “Caribbean Development Bank is extremely pleased to be a sponsor of the Animated Ideas Bootcamp as interventions such as these have the potential to contribute to reducing high youth male and female unemployment in the Caribbean by providing opportunities for capacity building training and strategic networking which can facilitate job creation and promote entrepreneurship. Support to this industry is also critical for the Region at this time, as we seek to diversify our economies and leverage the innovation and creativity of our human resources.”

festival last year we got our first outsourcing job for a TV show on a major network. It was a small production quantity but it tested our ability to produce as part of a global animation production pipeline. Following on from that, this year we’ve acquired new relationships with international production studios and we’ve done several outsourcing jobs in quantities that were manageable for us.

“From these experiences we’ve managed to both stay afloat financially as well as learn more and more about both our strengths and shortcomings.”

“In Jamaica we are on the cusp of a dynamic new shift. The outcome of which will remain to be rolled out over the next five years. CARIMAC has already begun a Bachelor’s of fine arts in animation.” Already we have seen new fervor and effort by entities such as World Bank and MSTEM Ministry of Science Technology to support and help position various entities to assist in building up the industry. MSTEM lent its support to JANN, providing a space for our official launch in July of 2014.”

“There is a renewed interest from the Caribbean diaspora from global organizations like EA Games, Pixar and Disney. They have expressed interest in giving back to their country. With a viable platform like Animae Caribe Festival and a government willing to see the critical value of this particular sector within the overall creative industry (one of the fastest growing currently, worth billions of dollars and employing millions of people worldwide) we have the ingredients.

“We just need to do the mixing, the pulling together of the critical resources and the will to expedite and make manifest the outcome, which is a viable, critical platform for employment, innovation and sustainability in animation game technology and digital media.” Camille Selvon Abrahams, Founder Animae Caribe Festival.