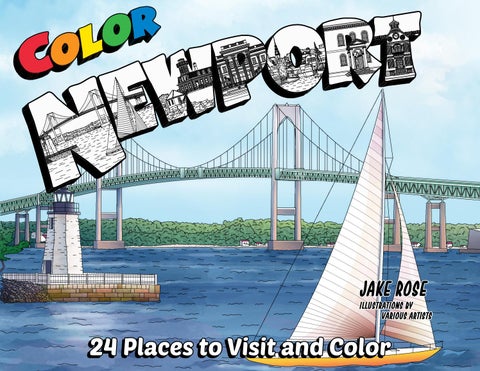 24 Places to Visit and Color

Photo from Library of Congress

2. Breakers Mansion The Breakers is the grandest of Newport’s summer “cottages” and a symbol of the Vanderbilt family’s social and financial preeminence in turn of the century America. Bought by Cornelius Vanderbilt II in 1885, he commissioned Richard Morris Hunt in 1893 to design an Italian Renaissance-style villa to replace the earlier wood-framed house. Inheriting the house in 1934, Gladys Vanderbilt opened The Breakers in 1948 to raise funds for the Preservation Society of Newport County. In 1972, the Preservation Society bought the house from her heirs. Today, the house is designated a National Historic Landmark.

3. Rosecliff Mansion Bought from George Bancroft in 1891 by Theresa and Hermann Oelrichs and commissioned by Theresa in 1899, Stanford White modeled Rosecliff after the Grand Trianon at Versailles. After the house was completed in 1902, Theresa hosted fabulous entertainments here, including a fairy tale dinner and a party featuring famed magician Harry Houdini. The Oelrichs later bought additional property along Bellevue Avenue and commissioned Stanford White to replace the original house with the mansion that became the setting for many of Newportâ&amp;#x20AC;&amp;#x2122;s most lavish parties. Rosecliff is now preserved through the generosity of its last private owners, Mr. and Mrs. J. Edgar Monroe. They gave the house, its furnishings, and an endowment to the Preservation Society in 1971. Scenes from several films have been shot on location at Rosecliff, including The Great Gatsby, True Lies, Amistad, and 27 Dresses.

4. Rose Island Lighthouse Built in Fort Hamilton in 1870, Rose Island Lighthouse shone its fixed red light over lower Narragansett Bay for a full century. However in 1970, the Lighthouse was taken out of service due to the newly completed Newport Pell Bridge having all the necessary aids to navigation situated upon the structure. Thankfully, the lighthouse was saved from demolition in 1984 due to the efforts of Charlotte Johnson and Curt Buntingâ&amp;#x20AC;&amp;#x2122;s Rose Island Lighthouse Foundation. The RILF then began restoring the lighthouse as a museum the following year, which was completed in 1993. The restoration efforts were facilitated by Wanton Chase, who helped the RILF understand how the lighthouse operated when he lived there between 1913 and 1918. The lighthouse museum is today configured to look as it did when Wanton lived there, right down to the kitchen stove. Today, Rose Island Lighthouse is open to the public during the spring and summer as a witness to maritime life and history of the late 19th and early 20th century. Today the building is on the National Register of Historic Places and is preserved in all its glory, forever.

5. Colony House Designed in an English Georgian style by Richard Munday and built by Benjamin Wyatt between 1736 and 1739, the Newport Colony House is the fourth oldest statehouse still standing in the United States. The Colony House’s floor plan follows the customary layout of English town or guild halls, which often had an open marketplace on the ground floor and civic offices on the second floor. Many important events associated with the United States’ formation occurred at the Colony House, like Major John Handy reading of the Declaration of Independence in 1776, as well as Rhode Island’s first public Roman Catholic mass. The Colony House served as Rhode Island’s primary state house from its completion in 1739 until 1901, when the new state house in Providence opened. From 1901 to 1926 it was the Newport County Courthouse. Between 1926 and 1932, the building was restored by Norman Isham. The Colony House contains a portrait of George Washington, painted by Gilbert Stuart. Designated a National Historic Landmark in 1962, the Colony House is owned by Rhode Island and managed by the Newport Historical Society.

7. Bowen’s Wharf At Bowen’s Wharf, brick walks, granite quays, and 18th century commercial wharf buildings bring you back to Newport’s beginnings as a thriving seaport in one of New England’s finest natural harbors. Located on the waterfront at the foot of Newport’s Historic Hill, Bowen’s Wharf has contributed to the city’s business and life since it was known as Arnold’s Wharf in the 17th century and Stevens’ Wharf in the 18th century. The cobblestone street, granite quay, rare 18th Century wharf buildings, and brick 19th Century buildings make this site unique both in New England and in America. Newport’s waterfront improvements to Bowen’s Wharf help to make it the perfect rendezvous point for your waterfront activities. However, Bowen’s Wharf is best known for its massive anchor. Hauled up by a lobster boat many miles offshore and placed onto the wharf by Bart Dunbar in the 1970’s, the wrought iron anchor serves as Bowen’s Wharf’s own landmark.

8. Touro Synagogue Newport received its first Jewish residents in the mid-17th century. In Newport they formed Congregation Nephuse Israel (Scattered of Israel), the United States’ second oldest Jewish congregation. By 1758, the Jewish population had grown sufficiently that there was a need for a house of worship. Designed by Peter Harrison in 1759, the Palladian-styled synagogue was completed in 1763. In 1790, Moses Seixas’ letter on the issues of religious liberties and the separation of church and state, as well as President George Washington’s response to it, came down as a key policy statement of the government in support of First Amendment rights. Abraham and Judah Touro’s financial and structural contributions to the building gave the synagogue its current name as well as a granite and wrought iron enclosure. Each year, Touro Synagogue holds a public reading of the George Washington letter as a celebration and pronouncement of religious freedom. Designated a National Historic Site in 1946, Touro Synagogue remains an active house of worship and is also toured by thousands of visitors every year.

21. Trinity Church Designed by Richard Munday and completed in 1726, Trinity Church is a truly wonderful place, soaked with nearly 300 years of prayers. As you enter Trinity, you’ll notice a jovial atmosphere around a chalice-shaped three-tiered pulpit in the center of the lower level–the only centeraisle, freestanding, triple-decked pulpit left in America today. On the main aisle’s south side is a box pew ornamented with silver plaques commemorating visitors of special significance who were seated there, such as George Washington, Queen Elizabeth II, Prince Andrew, and Archbishop Desmond Tutu.. Today, visitors to Trinity are welcomed by the “Sitting Saints,” who delight in pointing out the church’s details and priceless heritage. Now in their fourth century of existence, Trinity continues to be a worshiping community. Their mission statement makes clear that they are a community of Episcopalians gathered by Christ, serving and supporting one another and those in need. Their church is a beacon calling all for worship, fellowship, and growth in the grace and knowledge of the Lord.

22. Chinese Tea House Who would imagine there’s an authentic Chinese tea house hugging the Cliff Walk in Newport? Behind the Marble House lies this little treasure with incredible views of the Atlantic. Added onto the grounds of Marble House in 1908 by women’s right advocate Alva Belmont, the Chinese Tea House is modeled after 12th century Song Dynasty temples. At the Tea House, Alva held her rallies and meetings for women’s right to vote. The Tea House itself features an incredible amount of detail, including dragon sculptures, an Imperial Chinese Lion, gracefully curved roofs, and delicate carvings. If you want to get a glimpse of the Tea House without going to Marble House, hike the Cliff Walk. It appears today as it did in 1909 when Alva would bring her friends down to enjoy the sea breezes, or hold rallies for women’s rights. The Newport mansions are always a perfect place to take visiting family and friends, and at Marble House you get the added bonus of the Tea House. Maintained by the Preservation Society of Newport, the Tea House has recently undergone major renovation to ensure it is around for the public to enjoy for years to come.

Color Newport is filled to the brim with the town’s most iconic settings, such as the Newport Bridge, the Marble House, and Touro Synagogue, among many others.

Through its 24 beautiful black-andwhite line drawings and detailed descriptions, “Color Newport” masterfully highlights what makes this beautiful seaside refuge so special to its residents and visitors.

Color Newport by Jake Rose is a celebration of the town of Newport. Color Newport is filled to the brim with the town’s most iconic settings, such as the Newport Bridge, the Marble House, and Touro Synagogue, among many others. Through its 24 beautiful black-and-white line drawings and detailed descriptions, “Color Newport” masterfully highlights what makes this beautiful seaside refuge so special to its residents and visitors. 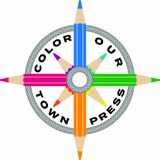