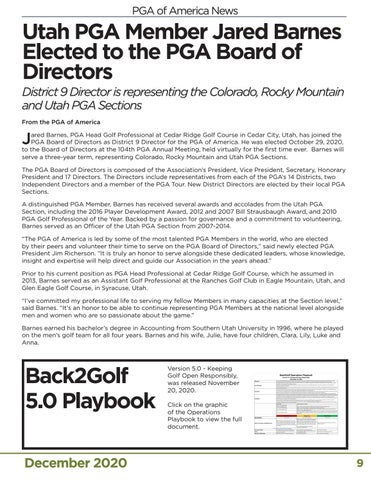 District 9 Director is representing the Colorado, Rocky Mountain and Utah PGA Sections From the PGA of America

ared Barnes, PGA Head Golf Professional at Cedar Ridge Golf Course in Cedar City, Utah, has joined the PGA Board of Directors as District 9 Director for the PGA of America. He was elected October 29, 2020, to the Board of Directors at the 104th PGA Annual Meeting, held virtually for the first time ever. Barnes will serve a three-year term, representing Colorado, Rocky Mountain and Utah PGA Sections. The PGA Board of Directors is composed of the Association’s President, Vice President, Secretary, Honorary President and 17 Directors. The Directors include representatives from each of the PGA’s 14 Districts, two Independent Directors and a member of the PGA Tour. New District Directors are elected by their local PGA Sections. A distinguished PGA Member, Barnes has received several awards and accolades from the Utah PGA Section, including the 2016 Player Development Award, 2012 and 2007 Bill Strausbaugh Award, and 2010 PGA Golf Professional of the Year. Backed by a passion for governance and a commitment to volunteering, Barnes served as an Officer of the Utah PGA Section from 2007-2014. “The PGA of America is led by some of the most talented PGA Members in the world, who are elected by their peers and volunteer their time to serve on the PGA Board of Directors,” said newly elected PGA President Jim Richerson. “It is truly an honor to serve alongside these dedicated leaders, whose knowledge, insight and expertise will help direct and guide our Association in the years ahead.” Prior to his current position as PGA Head Professional at Cedar Ridge Golf Course, which he assumed in 2013, Barnes served as an Assistant Golf Professional at the Ranches Golf Club in Eagle Mountain, Utah, and Glen Eagle Golf Course, in Syracuse, Utah. “I’ve committed my professional life to serving my fellow Members in many capacities at the Section level,” said Barnes. “It’s an honor to be able to continue representing PGA Members at the national level alongside men and women who are so passionate about the game.” Barnes earned his bachelor’s degree in Accounting from Southern Utah University in 1996, where he played on the men’s golf team for all four years. Barnes and his wife, Julie, have four children, Clara, Lily, Luke and Anna.

Version 5.0 - Keeping Golf Open Responsibly, was released November 20, 2020. Click on the graphic of the Operations Playbook to view the full document.