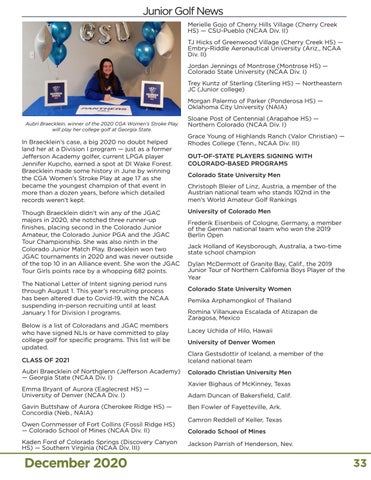 In Braecklein’s case, a big 2020 no doubt helped land her at a Division I program — just as a former Jefferson Academy golfer, current LPGA player Jennifer Kupcho, earned a spot at DI Wake Forest. Braecklein made some history in June by winning the CGA Women’s Stroke Play at age 17 as she became the youngest champion of that event in more than a dozen years, before which detailed records weren’t kept. Though Braecklein didn’t win any of the JGAC majors in 2020, she notched three runner-up finishes, placing second in the Colorado Junior Amateur, the Colorado Junior PGA and the JGAC Tour Championship. She was also ninth in the Colorado Junior Match Play. Braecklein won two JGAC tournaments in 2020 and was never outside of the top 10 in an Alliance event. She won the JGAC Tour Girls points race by a whopping 682 points. The National Letter of Intent signing period runs through August 1. This year’s recruiting process has been altered due to Covid-19, with the NCAA suspending in-person recruiting until at least January 1 for Division I programs. Below is a list of Coloradans and JGAC members who have signed NLIs or have committed to play college golf for specific programs. This list will be updated.

Clara Gestsdottir of Iceland, a member of the Iceland national team