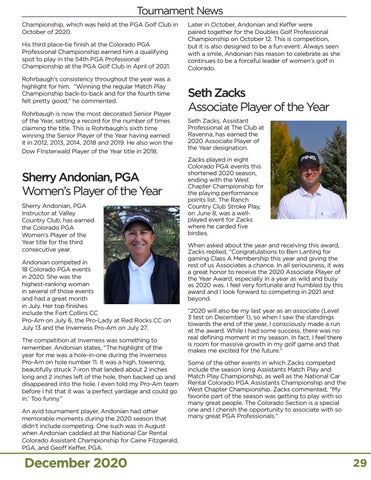 Tournament News Championship, which was held at the PGA Golf Club in October of 2020. His third place-tie finish at the Colorado PGA Professional Championship earned him a qualifying spot to play in the 54th PGA Professional Championship at the PGA Golf Club in April of 2021. Rohrbaugh’s consistency throughout the year was a highlight for him. “Winning the regular Match Play Championship back-to-back and for the fourth time felt pretty good,” he commented. Rohrbaugh is now the most decorated Senior Player of the Year, setting a record for the number of times claiming the title. This is Rohrbaugh’s sixth time winning the Senior Player of the Year having earned it in 2012, 2013, 2014, 2018 and 2019. He also won the Dow FInsterwald Player of the Year title in 2018.

Sherry Andonian, PGA Women’s Player of the Year Sherry Andonian, PGA Instructor at Valley Country Club, has earned the Colorado PGA Women’s Player of the Year title for the third consecutive year. Andonian competed in 18 Colorado PGA events in 2020. She was the highest-ranking woman in several of those events and had a great month in July. Her top finishes include the Fort Collins CC Pro-Am on July 6, the Pro-Lady at Red Rocks CC on July 13 and the Inverness Pro-Am on July 27. The competition at Inverness was something to remember. Andonian states, “The highlight of the year for me was a hole-in-one during the Inverness Pro-Am on hole number 11. It was a high, towering, beautifully struck 7-iron that landed about 2 inches long and 2 inches left of the hole, then backed up and disappeared into the hole. I even told my Pro-Am team before I hit that it was ‘a perfect yardage and could go in.’ Too funny.” An avid tournament player, Andonian had other memorable moments during the 2020 season that didn’t include competing. One such was in August when Andonian caddied at the National Car Rental Colorado Assistant Championship for Caine Fitzgerald, PGA, and Geoff Keffer, PGA.

Later in October, Andonian and Keffer were paired together for the Doubles Golf Professional Championship on October 12. This is competition, but it is also designed to be a fun event. Always seen with a smile, Andonian has reason to celebrate as she continues to be a forceful leader of women’s golf in Colorado.

Seth Zacks Associate Player of the Year Seth Zacks, Assistant Professional at The Club at Ravenna, has earned the 2020 Associate Player of the Year designation. Zacks played in eight Colorado PGA events this shortened 2020 season, ending with the West Chapter Championship for the playing performance points list. The Ranch Country Club Stroke Play, on June 8, was a wellplayed event for Zacks where he carded five birdies. When asked about the year and receiving this award, Zacks replied, “Congratulations to Ben Lanting for gaining Class A Membership this year and giving the rest of us Associates a chance. In all seriousness, it was a great honor to receive the 2020 Associate Player of the Year Award, especially in a year as wild and busy as 2020 was. I feel very fortunate and humbled by this award and I look forward to competing in 2021 and beyond. “2020 will also be my last year as an associate (Level 3 test on December 1), so when I saw the standings towards the end of the year, I consciously made a run at the award. While I had some success, there was no real defining moment in my season. In fact, I feel there is room for massive growth in my golf game and that makes me excited for the future.” Some of the other events in which Zacks competed include the season long Assistants Match Play and Match Play Championship, as well as the National Car Rental Colorado PGA Assistants Championship and the West Chapter Championship. Zacks commented, “My favorite part of the season was getting to play with so many great people. The Colorado Section is a special one and I cherish the opportunity to associate with so many great PGA Professionals.”