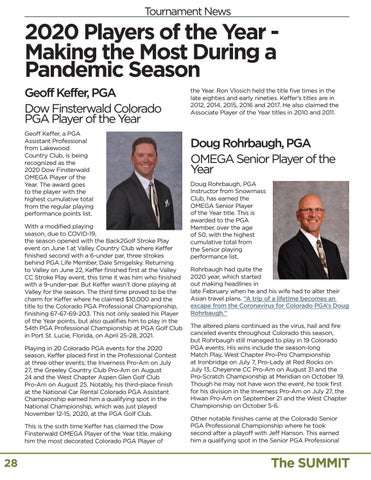 2020 Players of the Year Making the Most During a Pandemic Season Geoff Keffer, PGA Dow Finsterwald Colorado PGA Player of the Year Geoff Keffer, a PGA Assistant Professional from Lakewood Country Club, is being recognized as the 2020 Dow Finsterwald OMEGA Player of the Year. The award goes to the player with the highest cumulative total from the regular playing performance points list. With a modified playing season, due to COVID-19, the season opened with the Back2Golf Stroke Play event on June 1 at Valley Country Club where Keffer finished second with a 6-under par, three strokes behind PGA Life Member, Dale Smigelsky. Returning to Valley on June 22, Keffer finished first at the Valley CC Stroke Play event, this time it was him who finished with a 9-under-par. But Keffer wasn’t done playing at Valley for the season. The third time proved to be the charm for Keffer where he claimed $10,000 and the title to the Colorado PGA Professional Championship, finishing 67-67-69-203. This not only sealed his Player of the Year points, but also qualifies him to play in the 54th PGA Professional Championship at PGA Golf Club in Port St. Lucie, Florida, on April 25-28, 2021. Playing in 20 Colorado PGA events for the 2020 season, Keffer placed first in the Professional Contest at three other events; the Inverness Pro-Am on July 27, the Greeley Country Club Pro-Am on August 24 and the West Chapter Aspen Glen Golf Club Pro-Am on August 25. Notably, his third-place finish at the National Car Rental Colorado PGA Assistant Championship earned him a qualifying spot in the National Championship, which was just played November 12-15, 2020, at the PGA Golf Club. This is the sixth time Keffer has claimed the Dow Finsterwald OMEGA Player of the Year title, making him the most decorated Colorado PGA Player of

Doug Rohrbaugh, PGA OMEGA Senior Player of the Year Doug Rohrbaugh, PGA Instructor from Snowmass Club, has earned the OMEGA Senior Player of the Year title. This is awarded to the PGA Member, over the age of 50, with the highest cumulative total from the Senior playing performance list. Rohrbaugh had quite the 2020 year, which started out making headlines in late February when he and his wife had to alter their Asian travel plans. “A trip of a lifetime becomes an escape from the Coronavirus for Colorado PGA’s Doug Rohrbaugh.” The altered plans continued as the virus, hail and fire canceled events throughout Colorado this season, but Rohrbaugh still managed to play in 19 Colorado PGA events. His wins include the season-long Match Play, West Chapter Pro-Pro Championship at Ironbridge on July 7, Pro-Lady at Red Rocks on July 13, Cheyenne CC Pro-Am on August 31 and the Pro-Scratch Championship at Meridian on October 19. Though he may not have won the event, he took first for his division in the Inverness Pro-Am on July 27, the Hiwan Pro-Am on September 21 and the West Chapter Championship on October 5-6. Other notable finishes came at the Colorado Senior PGA Professional Championship where he took second after a playoff with Jeff Hanson. This earned him a qualifying spot in the Senior PGA Professional