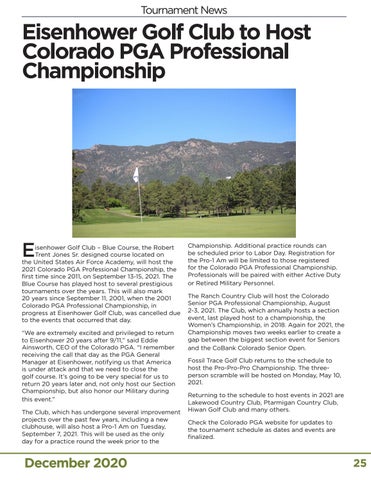 isenhower Golf Club – Blue Course, the Robert Trent Jones Sr. designed course located on the United States Air Force Academy, will host the 2021 Colorado PGA Professional Championship, the first time since 2011, on September 13-15, 2021. The Blue Course has played host to several prestigious tournaments over the years. This will also mark 20 years since September 11, 2001, when the 2001 Colorado PGA Professional Championship, in progress at Eisenhower Golf Club, was cancelled due to the events that occurred that day. “We are extremely excited and privileged to return to Eisenhower 20 years after 9/11,” said Eddie Ainsworth, CEO of the Colorado PGA. “I remember receiving the call that day as the PGA General Manager at Eisenhower, notifying us that America is under attack and that we need to close the golf course. It’s going to be very special for us to return 20 years later and, not only host our Section Championship, but also honor our Military during this event.” The Club, which has undergone several improvement projects over the past few years, including a new clubhouse, will also host a Pro-1 Am on Tuesday, September 7, 2021. This will be used as the only day for a practice round the week prior to the

Championship. Additional practice rounds can be scheduled prior to Labor Day. Registration for the Pro-1 Am will be limited to those registered for the Colorado PGA Professional Championship. Professionals will be paired with either Active Duty or Retired Military Personnel. The Ranch Country Club will host the Colorado Senior PGA Professional Championship, August 2-3, 2021. The Club, which annually hosts a section event, last played host to a championship, the Women’s Championship, in 2018. Again for 2021, the Championship moves two weeks earlier to create a gap between the biggest section event for Seniors and the CoBank Colorado Senior Open. Fossil Trace Golf Club returns to the schedule to host the Pro-Pro-Pro Championship. The threeperson scramble will be hosted on Monday, May 10, 2021. Returning to the schedule to host events in 2021 are Lakewood Country Club, Ptarmigan Country Club, Hiwan Golf Club and many others. Check the Colorado PGA website for updates to the tournament schedule as dates and events are finalized.