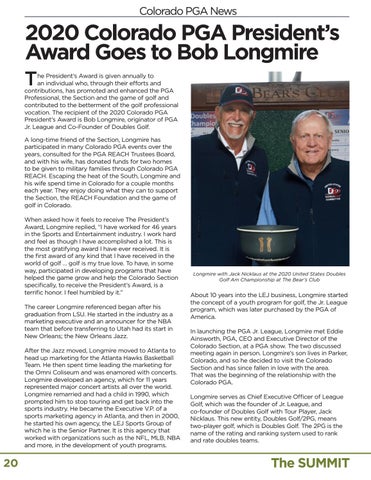 he President’s Award is given annually to an individual who, through their efforts and contributions, has promoted and enhanced the PGA Professional, the Section and the game of golf and contributed to the betterment of the golf professional vocation. The recipient of the 2020 Colorado PGA President’s Award is Bob Longmire, originator of PGA Jr. League and Co-Founder of Doubles Golf. A long-time friend of the Section, Longmire has participated in many Colorado PGA events over the years, consulted for the PGA REACH Trustees Board, and with his wife, has donated funds for two homes to be given to military families through Colorado PGA REACH. Escaping the heat of the South, Longmire and his wife spend time in Colorado for a couple months each year. They enjoy doing what they can to support the Section, the REACH Foundation and the game of golf in Colorado. When asked how it feels to receive The President’s Award, Longmire replied, “I have worked for 46 years in the Sports and Entertainment industry. I work hard and feel as though I have accomplished a lot. This is the most gratifying award I have ever received. It is the first award of any kind that I have received in the world of golf … golf is my true love. To have, in some way, participated in developing programs that have helped the game grow and help the Colorado Section specifically, to receive the President’s Award, is a terrific honor. I feel humbled by it.” The career Longmire referenced began after his graduation from LSU. He started in the industry as a marketing executive and an announcer for the NBA team that before transferring to Utah had its start in New Orleans; the New Orleans Jazz. After the Jazz moved, Longmire moved to Atlanta to head up marketing for the Atlanta Hawks Basketball Team. He then spent time leading the marketing for the Omni Coliseum and was enamored with concerts. Longmire developed an agency, which for 11 years represented major concert artists all over the world. Longmire remarried and had a child in 1990, which prompted him to stop touring and get back into the sports industry. He became the Executive V.P. of a sports marketing agency in Atlanta, and then in 2000, he started his own agency, the LEJ Sports Group of which he is the Senior Partner. It is this agency that worked with organizations such as the NFL, MLB, NBA and more, in the development of youth programs.

About 10 years into the LEJ business, Longmire started the concept of a youth program for golf, the Jr. League program, which was later purchased by the PGA of America. In launching the PGA Jr. League, Longmire met Eddie Ainsworth, PGA, CEO and Executive Director of the Colorado Section, at a PGA show. The two discussed meeting again in person. Longmire’s son lives in Parker, Colorado, and so he decided to visit the Colorado Section and has since fallen in love with the area. That was the beginning of the relationship with the Colorado PGA. Longmire serves as Chief Executive Officer of League Golf, which was the founder of Jr. League, and co-founder of Doubles Golf with Tour Player, Jack Nicklaus. This new entity, Doubles Golf/2PG, means two-player golf, which is Doubles Golf. The 2PG is the name of the rating and ranking system used to rank and rate doubles teams.