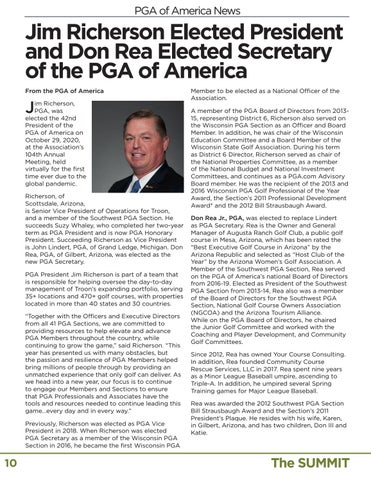 im Richerson, PGA, was elected the 42nd President of the PGA of America on October 29, 2020, at the Association’s 104th Annual Meeting, held virtually for the first time ever due to the global pandemic. Richerson, of Scottsdale, Arizona, is Senior Vice President of Operations for Troon, and a member of the Southwest PGA Section. He succeeds Suzy Whaley, who completed her two-year term as PGA President and is now PGA Honorary President. Succeeding Richerson as Vice President is John Lindert, PGA, of Grand Ledge, Michigan. Don Rea, PGA, of Gilbert, Arizona, was elected as the new PGA Secretary. PGA President Jim Richerson is part of a team that is responsible for helping oversee the day-to-day management of Troon’s expanding portfolio, serving 35+ locations and 470+ golf courses, with properties located in more than 40 states and 30 countries. “Together with the Officers and Executive Directors from all 41 PGA Sections, we are committed to providing resources to help elevate and advance PGA Members throughout the country, while continuing to grow the game,” said Richerson. “This year has presented us with many obstacles, but the passion and resilience of PGA Members helped bring millions of people through by providing an unmatched experience that only golf can deliver. As we head into a new year, our focus is to continue to engage our Members and Sections to ensure that PGA Professionals and Associates have the tools and resources needed to continue leading this game…every day and in every way.” Previously, Richerson was elected as PGA Vice President in 2018. When Richerson was elected PGA Secretary as a member of the Wisconsin PGA Section in 2016, he became the first Wisconsin PGA

Member to be elected as a National Officer of the Association. A member of the PGA Board of Directors from 201315, representing District 6, Richerson also served on the Wisconsin PGA Section as an Officer and Board Member. In addition, he was chair of the Wisconsin Education Committee and a Board Member of the Wisconsin State Golf Association. During his term as District 6 Director, Richerson served as chair of the National Properties Committee, as a member of the National Budget and National Investment Committees, and continues as a PGA.com Advisory Board member. He was the recipient of the 2013 and 2016 Wisconsin PGA Golf Professional of the Year Award, the Section’s 2011 Professional Development Award* and the 2012 Bill Strausbaugh Award. Don Rea Jr., PGA, was elected to replace Lindert as PGA Secretary. Rea is the Owner and General Manager of Augusta Ranch Golf Club, a public golf course in Mesa, Arizona, which has been rated the “Best Executive Golf Course in Arizona” by the Arizona Republic and selected as “Host Club of the Year” by the Arizona Women’s Golf Association. A Member of the Southwest PGA Section, Rea served on the PGA of America’s national Board of Directors from 2016-19. Elected as President of the Southwest PGA Section from 2013-14, Rea also was a member of the Board of Directors for the Southwest PGA Section, National Golf Course Owners Association (NGCOA) and the Arizona Tourism Alliance. While on the PGA Board of Directors, he chaired the Junior Golf Committee and worked with the Coaching and Player Development, and Community Golf Committees. Since 2012, Rea has owned Your Course Consulting. In addition, Rea founded Community Course Rescue Services, LLC in 2017. Rea spent nine years as a Minor League Baseball umpire, ascending to Triple-A. In addition, he umpired several Spring Training games for Major League Baseball. Rea was awarded the 2012 Southwest PGA Section Bill Strausbaugh Award and the Section’s 2011 President’s Plaque. He resides with his wife, Karen, in Gilbert, Arizona, and has two children, Don III and Katie.