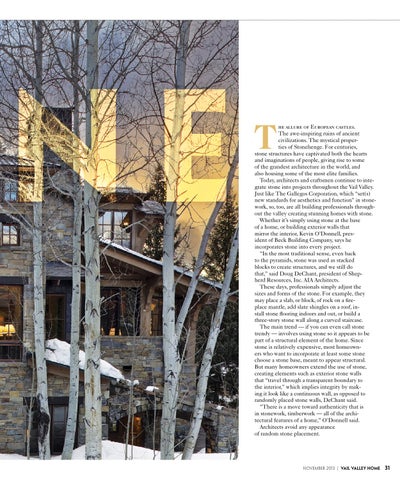 he allure of European castles. The awe-inspiring ruins of ancient civilizations. The mystical properties of Stonehenge. For centuries, stone structures have captivated both the hearts and imaginations of people, giving rise to some of the grandest architecture in the world, and also housing some of the most elite families. Today, architects and craftsmen continue to integrate stone into projects throughout the Vail Valley. Just like The Gallegos Corporation, which “set(s) new standards for aesthetics and function” in stonework, so, too, are all building professionals throughout the valley creating stunning homes with stone. Whether it’s simply using stone at the base of a home, or building exterior walls that mirror the interior, Kevin O’Donnell, president of Beck Building Company, says he incorporates stone into every project. “In the most traditional sense, even back to the pyramids, stone was used as stacked blocks to create structures, and we still do that,” said Doug DeChant, president of Shepherd Resources, Inc. AIA Architects. These days, professionals simply adjust the sizes and forms of the stone. For example, they may place a slab, or block, of rock on a fireplace mantle, add slate shingles on a roof, install stone flooring indoors and out, or build a three-story stone wall along a curved staircase. The main trend — if you can even call stone trendy — involves using stone so it appears to be part of a structural element of the home. Since stone is relatively expensive, most homeowners who want to incorporate at least some stone choose a stone base, meant to appear structural. But many homeowners extend the use of stone, creating elements such as exterior stone walls that “travel through a transparent boundary to the interior,” which implies integrity by making it look like a continuous wall, as opposed to randomly placed stone walls, DeChant said. “There is a move toward authenticity that is in stonework, timberwork — all of the architectural features of a home,” O’Donnell said. Architects avoid any appearance of random stone placement.