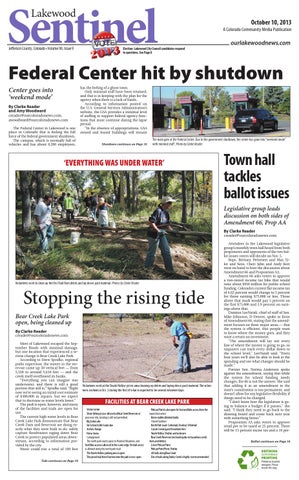 Federal Center hit by shutdown Center goes into ‘weekend mode’ By Clarke Reader and Amy Woodward creader@ourcoloradonews.com, awoodward@ourcoloradonews.com The Federal Center in Lakewood is one place in Colorado that is feeling the full force of the federal government shutdown. The campus, which is normally full of vehicles and has about 6,200 employees,

has the feeling of a ghost town. Only minimal staff have been retained, and that is in keeping with the plan for the agency when there is a lack of funds. According to information posted on the U.S. General Services Administration’s website, the GSA provides a minimal level of staffing to support federal agency functions that must continue during the lapse period. “In the absence of appropriations, GSA owned and leased buildings will remain Shutdown continues on Page 16

The main gate at the Federal Center. Due to the government shutdown, the center has gone into “weekend mode” with minimal staff . Photo by Clarke Reader

‘EVERYTHING WAS UNDER WATER’

Volunteers work to clean up the Owl Trail from debris and lay down pack material. Photos by Clarke Reader

creader@ourcoloradonews.com Most of Lakewood escaped the September floods with minimal damage, but one location that experienced a serious change is Bear Creek Lake Park. According to Drew Sprafke, regional parks supervisor, the waters in the reservoir came up 50 vertical feet — from 5,558 to around 5,610 feet — and the creek itself overflowed its banks. “Everything you can imagine was underwater, and there is still a good portion that still is,” Sprafke said. “Right now we’re seeing an initial cost estimate of $380,000 in repairs, but we expect that to decrease as water levels lower.” The park is open, however, and many of the facilities and trails are open for use. The current high water levels in Bear Creek Lake Park demonstrate that Bear Creek Dam and Reservoir are doing exactly what they were built to do: safely capture floodwaters raging down Bear Creek to protect populated areas downstream, according to information provided by the city. Water could rise a total of 109 feet Tide continues on Page 16

Volunteers work at the Skunk Hollow picnic area cleaning up debris and laying down pack material. The volunteers worked on Oct. 2 during the first of what is expected to be several volunteer days.

FACILITIES AT BEAR CREEK LAKE PARK Visitor Center Shore fishing is now allowed at Bear Creek Reservoir at your own risk, boating is still not permitted. Big Soda Lake Ski School/Little Soda Lake Archery Range Horse Arena Campground The north park road is open to Muskrat Meadows, and foot/bike access is allowed to the water edge. No trail access is allowed along the north park road The Skunk Hollow parking area is open The paved trail from Morrison into the park is now open

Attendees to the Lakewood legislative group’s monthly town hall heard from both proponents and opponents of the two ballot issues voters will decide on Nov. 5. Reps. Brittany Pettersen and Max Tyler and Sens. Cheri Jahn and Andy Kerr were on hand to host the discussion about Amendment 66 and Proposition AA. Amendment 66 asks voters to approve a two-tiered income tax hike that would raise about $950 million for public school funding. Colorado’s current flat income tax of 4.63 percent would change to 5 percent for those earning $75,000 or less. Those above that mark would pay 5 percent on the first $75,000 and 5.9 percent on earnings above that. Damion LeeNatali, chief of staff of Sen. Mike Johnston, D-Denver, spoke in favor of Amendment 66, stating that the amendment focuses on three major areas — that the system is efficient, that people want to know where the money goes, and they want a return on investment. “The amendment will lay out every line of where the money is going to go, so taxpayers can track every dollar down to the school level,” LeeNatali said. “Every four years we’ll also be able to look at the spending and see what changes should be made.” Former Sen. Norma Anderson spoke against the amendment, saying that while the system for school funding needs changes, the 66 is not the answer. She said that adding it as an amendment to the state’s constitution is too permanent, and doesn’t allow for any legislative flexibility if things need to be changed. “I don’t know how the legislature is going to balance a budget if it passes,” she said. “I think they need to go back to the drawing board and come back next year with something better.” Proposition AA asks voters to approve retail pot to be taxed at 25 percent. There will be 15 percent excise tax and a 10 perBallot continues on Page 16 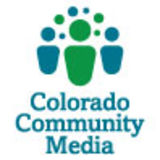