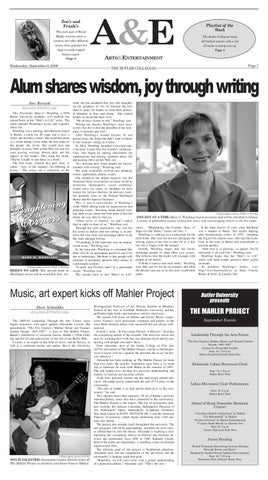 Playlist of the Week The Butler Collegian kicks off football season with a list of tracks to pump you up. Page 8

Alum shares wisdom, joy through writing Amy Rensink arensink@butler.edu This November, Mary C. Woolling, a 1976 Butler University graduate, will publish her second book in her “Here’s to Life” series. The series includes Woolling’s essays and vignettes about life. Woolling was a zoology and chemistry major at Butler, a nurse for 20 years and is now a writer and business owner. She found her place as a writer during a time when she lost many of the people she loved. She would post her thoughts in essay form on her Web site and was soon posting writings almost daily per the request of her readers. This made her think, “Maybe I ought to put these in a book.” The first book, released this past June, is called “Joys of the Journey: An Offering of Essays.” The essays are a collection of the

HERE’S TO LIFE: The second book in Woolling’s series will be available Nov. 1st.

work she has produced thus far—her thoughts on the goodness of life. In between the text there is space for readers to write their personal thoughts as they read along. She wanted readers to document their story. “We all have stories to tell,” Woolling said. Writing has become Woolling’s main focus in life, but she is also the president of her company, Communi-cate LLC. After Woolling’s mother became ill and passed away, she found she didn’t want to return to the hospital setting as a nurse. In 2004, Woolling launched Communi-cate, a business named after her mother’s nickname, Cate. She began by editing newsletters for organizations and writing vignettes about life and posting them on her Web site. “It’s amazing how many people are uncomfortable with writing,” Woolling said. Her work eventually evolved into planning events, particularly charity events. One fundraiser she helped organize was the American Dairy Association ice cream social in downtown Indianapolis. Local celebrities would serve ice cream to attendees to raise money for various charities. In previous years, the proceeds went to the Ronald McDonald House and the Special Olympics. This is just a cross-section of Woolling’s work. While editing work for organizations and planning events, Woolling found herself writing short essays about the little parts of her life where she was able to find joy. “Often we’re so hurried, we don’t realize they’re right in front of us,” Woolling said. Through her own experiences, she said she has come to realize that her calling is to preserve her own story and encourage others to do the same through writing. “Everything in life translates into an inspirational essay,” Woolling said. In the long run, Woolling is concerned that there will be no permanent record of our lives due to technology. Her hope is that people will continue to accurately preserve their stories in a permanent medium. “E-mails and Twitters aren’t in a permanent record,” Woolling said. The second book in the “Here’s to Life”

ONE DAY AT A TIME: Mary C. Woolling, business owner and writer, decided to release a series of published essays telling her story and encouraging others to do the same. series, “Brightening the Corners: Rays of Hope for Our World,” comes out Nov. 1. Woolling is working on a manuscript for the third book. She said she did not anticipate the writing aspect of her life to take off as it did, but she is happy with the turnout. Overall, Woolling hopes that her books encourage people to share their own stories. She believes that the books will resonate with people of all beliefs. “I think I found a universal truth,” Woolling said. She said we are all on journeys and often the detours turn out to be the most worthwhile paths.

Music, art expert kicks off Mahler Project Drew Schmidtke dmschmid@butler.edu The 2009-10 Leadership Through the Arts Forum series begins tomorrow with guest speaker Alessandra Comini. Her presentation, “The Two Gustavs: Mahler, Klimt and Vienna’s Golden Decade, 1897-1907,” is part of The Mahler Project, Butler’s celebration of composer Gustav Mahler’s 150th birthday and the 20-year anniversary of the fall of the Berlin Wall. Comini is an expert in the field of music and art history, as well as a celebrated teacher and author. She is the University

Distinguished Professor of Art History Emerita at Meadows School of the Arts at Southern Methodist University and has published eight books and numerous articles and essays. The speech will focus on Mahler and Gustav Klimt, respectively Vienna’s most prominent composer and painter of the time. Both Austrian artists were successful but not always wellreceived. Comini’s book, “In Passionate Pursuit: A Memoir,” describes the compelling nature of her research. She discovers artists not only by studying their work but also through travel and by connecting with people who knew them. Peter Alexander, dean of the Jordan College of Fine Arts (JCFA) and creator of The Mahler Project, said he is thrilled professor Comini will be a speaker. He describes her as an “art history detective.” Alexander has been working on The Mahler Project for more than two years. He said his inspiration came from a six-week trip to Germany he took with Butler in the summer of 2007. The trip helped him develop his previous understanding and interest in German and Austrian culture. Aside from personal interest and the anniversary-related relevance, Alexander said he understands the part JCFA plays in the community. “The role of Jordan is to lead and be innovative in the community,” he said. This idea has been taken seriously. Of all of Butler’s previous interdisciplinary series that have connected to the community, The Mahler Project is the largest. The list of community partners includes the German Consulate, Indianapolis Museum of Art, Indianapolis Opera, Indianapolis Symphony Orchestra, Max Kade Center at IUPUI, WFYI-FM (90.1) and the American Pianists Association, which began celebrating early with concerts last spring. The project also extends itself throughout the university. The arts programs will all be participating, and there are even classes offered that tie into the theme. Alexander is teaching a class exploring the overarching themes in German and Austrian art, music and architecture from 1890 to 1940. Kenneth Creech, head of the media arts department, is teaching a class on German expressionist film. The ultimate goal of the project is heightened education, Alexander said, and the cooperation of the university and the community is helping reach that goal. “Hopefully, we will come away with a greater understanding of a particular culture,” Alexander said. “That’s the aim.”

It has been almost 35 years since Woolling was a student at Butler. She recalls helping plan homecoming events in 1975, including the Sigma Chi chariot races. She said she looks back at her time at Butler and remembered it passing quickly. “That time is so precious, so special. You’ll remember it all your life,” Woolling said. Woolling hopes that her “Here’s to Life” series will help readers preserve these joyful moments. To purchase Woolling’s books, visit http://www.herestolife.us or Holy Family Books & Gifts in Carmel, Ind.