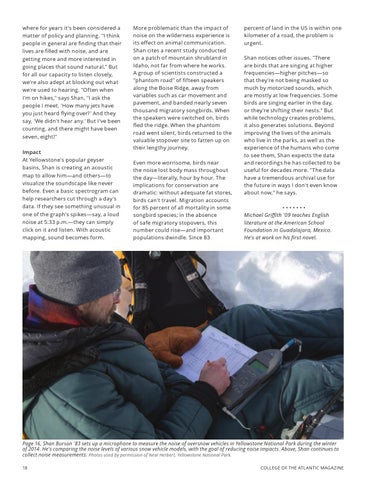 where for years it's been considered a matter of policy and planning. "I think people in general are finding that their lives are filled with noise, and are getting more and more interested in going places that sound natural." But for all our capacity to listen closely, we're also adept at blocking out what we're used to hearing. "Often when I'm on hikes," says Shan, "I ask the people I meet, 'How many jets have you just heard flying over?' And they say, 'We didn't hear any.' But I've been counting, and there might have been seven, eight!" Impact At Yellowstone's popular geyser basins, Shan is creating an acoustic map to allow him—and others—to visualize the soundscape like never before. Even a basic spectrogram can help researchers cut through a day's data. If they see something unusual in one of the graph's spikes—say, a loud noise at 5:33 p.m.—they can simply click on it and listen. With acoustic mapping, sound becomes form.

More problematic than the impact of noise on the wilderness experience is its effect on animal communication. Shan cites a recent study conducted on a patch of mountain shrubland in Idaho, not far from where he works. A group of scientists constructed a "phantom road" of fifteen speakers along the Boise Ridge, away from variables such as car movement and pavement, and banded nearly seven thousand migratory songbirds. When the speakers were switched on, birds fled the ridge. When the phantom road went silent, birds returned to the valuable stopover site to fatten up on their lengthy journey. Even more worrisome, birds near the noise lost body mass throughout the day—literally, hour by hour. The implications for conservation are dramatic: without adequate fat stores, birds can't travel. Migration accounts for 85 percent of all mortality in some songbird species; in the absence of safe migratory stopovers, this number could rise—and important populations dwindle. Since 83

percent of land in the US is within one kilometer of a road, the problem is urgent. Shan notices other issues. "There are birds that are singing at higher frequencies—higher pitches—so that they're not being masked so much by motorized sounds, which are mostly at low frequencies. Some birds are singing earlier in the day, or they're shifting their nests." But while technology creates problems, it also generates solutions. Beyond improving the lives of the animals who live in the parks, as well as the experience of the humans who come to see them, Shan expects the data and recordings he has collected to be useful for decades more. "The data have a tremendous archival use for the future in ways I don't even know about now," he says. ••••••• Michael Griffith '09 teaches English literature at the American School Foundation in Guadalajara, Mexico. He's at work on his first novel.

Page 16, Shan Burson '83 sets up a microphone to measure the noise of oversnow vehicles in Yellowstone National Park during the winter of 2014. He's comparing the noise levels of various snow vehicle models, with the goal of reducing noise impacts. Above, Shan continues to collect noise measurements. Photos used by permission of Neal Herbert, Yellowstone National Park. 18

COLLEGE OF THE ATLANTIC MAGAZINE 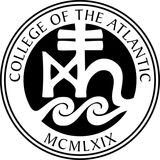 College of the Atlantic